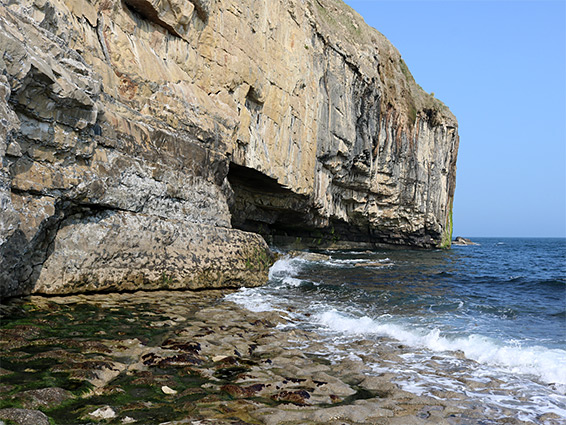 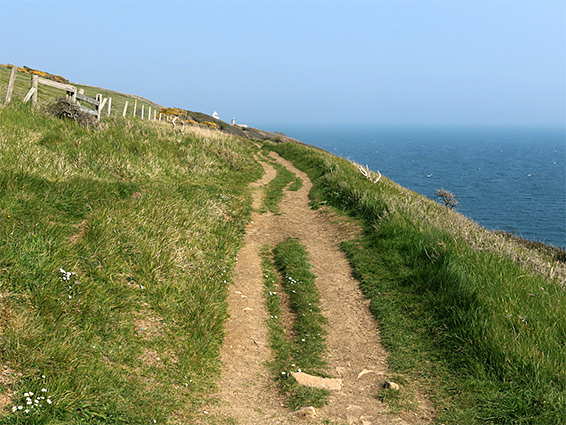 Cliff-bound section of the Jurassic Coast in east Dorset, on the Isle of Purbeck, including Anvil Point, Dancing Ledge and Headbury Quarry. Mostly explorable only via the coast path, due to the sheer cliffs

Durlston Head is a promontory at the southeast corner of the Isle of Purbeck in Dorset, along a cliff-bound section of the Jurassic Coast, lacking any beaches or natural access points to the sea - sheer cliffs of Portland limestone, up to 200 feet high, form an impassible barrier, interrupted only by a few valleys, the first, to the west, being Seacombe, 3.5 miles from the headland. A walk between these two points, along the coast path, offers grand views all the way, across treeless slopes, generally staying between 100 and 250 feet above the sea, through patches of gorse bushes and broad meadows, where the numerous wildflowers include many thousands of the rare early spider orchid, blooming in April and May.

The sea cliffs have been quarried in three places, the stone used amongst other purposes for construction of Ramsgate harbour in the 18th century; the steep drop-offs continue underwater, allowing ships to approach right up to the base of the cliffs, facilitating easy transport of the quarried stone. The floor of one of the quarries is low enough to enable climbing down to sea level, to a wave-cut terrace known as Dancing Ledge, on account of the undulating nature of the waves above it; the platform is uncovered for around four hours either side of low tide. Cliffs of the quarries are popular with rock climbers, as are several other locations along this section of the coast.

The walk between the two points begins at Durlston Head, location of a Victorian folly, Durlston Castle, and also of the Great Globe, a 40 ton limestone sphere; both were constructed in 1887 by a local stone merchant. One other building of interest, a third of a mile west, is the Anvil Point Lighthouse, an elegant white structure dating from 1881. 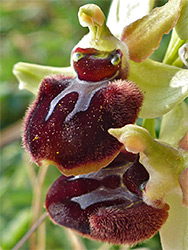 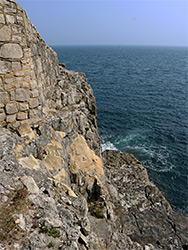 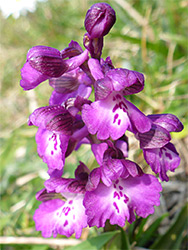 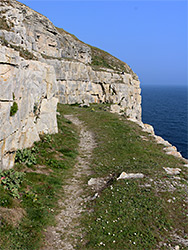 Path along a ledge

Various points along the coast path between Durlston Head and Seacombe may be reached by walks of between 0.6 and 1.2 miles from the north, either along the B3069 between Acton and Herston, or at the end of short lanes, but the usual start point to explore this stretch of the coast is the (paid) parking at Durlston County Park, which is also a National Nature Reserve, occupying 280 acres of the headland; along Lighthouse Road from Swanage. The road ends a short distance further at the four-storey Durlston Castle, now housing a cafe, gallery, shop and visitor centre for the Jurassic coast. The building is open every day of the year except December 25th and 26th. The ten foot-diameter Great Globe, one of the largest such objects in the world, sits on a patio just below, overlooking the sea. Castle and globe were constructed by George Burt of the Mowlem quarrying company, the founder of which, John Mowlem, was born in nearby Swanage. 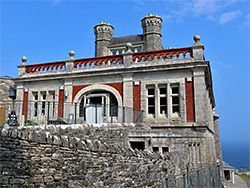 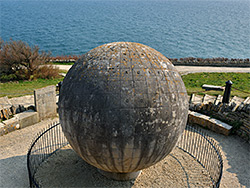 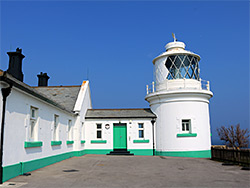 The coast path at Durlston Head loops around the castle, giving northwards views across Durlston Bay towards Old Harry Rocks, passes below the globe, and heads off to the west, following an old vehicle route, Tilly Whim Road, which leads to a disused quarry - Tilly Whim - after 1,200 feet. The quarry is thought to be named after an 18th century quarryman, George Tilly; it consists of a ledge, cliff and several caves, all once accessible to the public but currently closed because of safety concerns. The path runs along the top of the quarry and down to its former entrance on the west side, blocked by a stone wall, at a point quite close to sea level, at the end of a shallow valley. The trail rises at the far side to Anvil Point, a less-prominent headland, on top of which is the lighthouse, installed in 1881, still in operation, and fully automated since 1991. 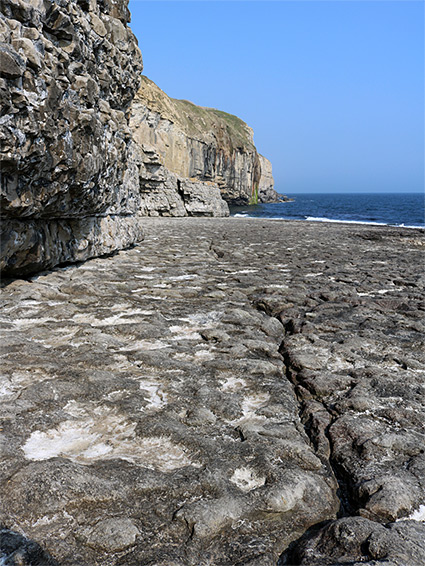 Round Down and Dancing Ledge

Beyond Anvil Point and its lighthouse, the coast is entirely undeveloped, and the path heads due west across gorse- and grass-covered terrain, along the southern slopes of Round Down, a broad limestone ridge. It crosses a succession of ancient field boundaries, hedgerows or walls, always out-of-sight of the edge of the sea owing to the slopes below, angling down to the limestone cliffs, though the base of these can be seen in several locations, by walking off-trail, down to benches. The next landmark, 2 miles from Anvil Point, is Dancing Ledge, below another old quarry, the floor of which is reached by a path and steps on the west side. The ledge itself is around 20 feet lower than the quarry floor, accessible by scrambling/climbing down a layered rock face; it is around 400 feet across, slightly sloping seawards, and quite flat. The ledge contains an excavated pool, created in the 1950s, as a place for local school children to learn to swim. The inter-tidal zone is quite impassible either side of the ledge, which is bordered by an undercut cliff to the east and a deep channel to the west, leading to a sea cave. The fields just above the quarry are the best location for the early spider orchid, though this is found in lesser abundance for several miles in each direction. 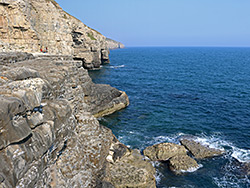 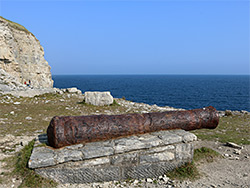 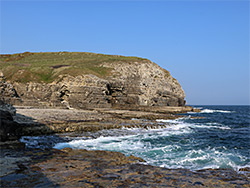 0.3 miles west of the Dancing Ledge quarry, the coast path curves round the upper edge of the similar-sized Headbury Quarry, which is excavated to less depth, resulting in a taller drop-off to the sea, still quite easily climbable. One incidental feature of note in this quarry is an ancient cannon, set on a stone plinth, and thought to originate from the spoils of an 1786 shipwreck. The quarry is visited mostly by rock climbers, scaling its northeast face. West of Headbury are couple of smaller quarries, before the path bends inland, descending to the stream flowing through Seacombe Bottom, the first place where the sea shore is properly accessible, though as with Dancing Ledge there is no beach here, just wave-cut terraces, descending in a series of small steps. The combe provides a route for a northwards path to Worth Matravers (0.9 miles), while to the west, the coast path continues to St Aldhelm's Point after 1.9 miles. 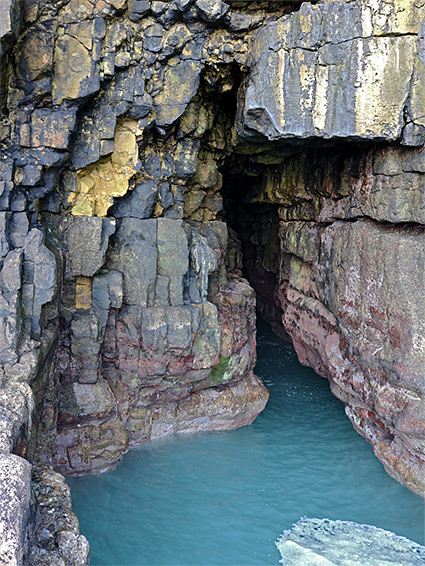