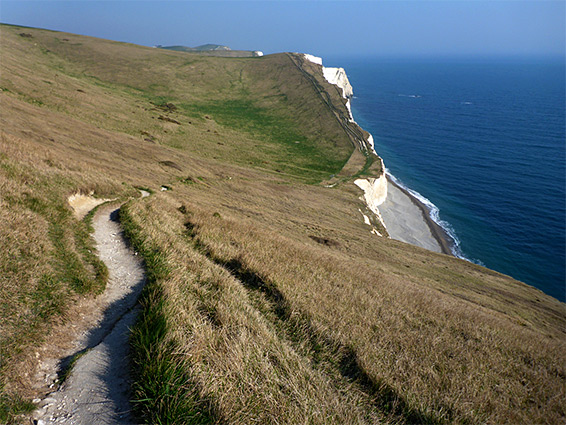 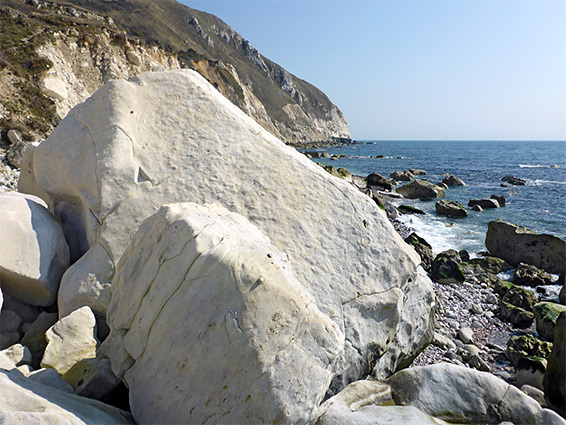 Three-mile section of the Dorset coast, lined by high chalk slopes with narrow beaches below, accessible at the bay and via a steep path at White Nothe

Location
Ringstead Carpark (National Trust); DT2 8NG
Walk
7 miles, round trip, to the beaches at Ringstead and White Nothe, and to the promontory above Bat's Head
Photo Tour (21 images)

Ringstead Bay to Bat's Head is a three mile section of Dorset's Jurassic Coast, mostly lined by steep slopes or vertical cliffs of chalk, with the sea accessible in two locations; the bay, and via a narrow path that descends from a chalk knoll, the White Nothe, to a rocky beach, a location also reachable, at low tide, by walking east from Ringstead. But east of here, the shoreline is entirely inaccessible from above, due to some parts of the cliffs that are submerged even at low tide; beach-level access resumes beyond Bat's Head (a promontory) by walking west from Durdle Door, which is by far the most popular place on the Jurassic Coast. Instead, all can be seen, from above, by walking along the coast path, much of which runs right along the rim of the cliffs, without any trees or bushes to block the views; the land is covered only by short grass and wildflowers.

The chalk, from the Newhaven Formation, comprises the majority of the bedrock hereabouts, though this moves inland to the north of Ringstead Bay, replaced by greyish mudstone from the Kimmeridge Clay Formation. The sea-facing chalk is partly grassy and sloping in the vicinity of White Nothe, then sheer and unvegetated further east, where its base is eroded by the waves into many interesting formations, though all this section is properly viewable only by boat.

There are two National Trust car parks for visiting this part of the coast, one towards the west end of Ringstead Bay, the other a little way inland, at the end of the driveable section of a road from Upton; the walk described below starts from here. 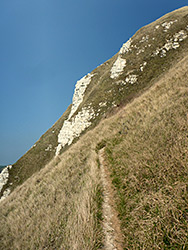 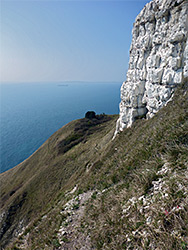 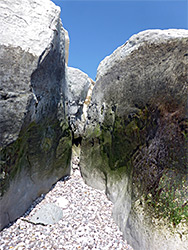 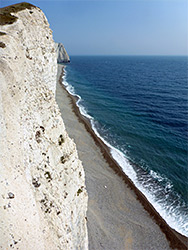 The road from the upper car park, now a bridleway, continues east, while a path forks off to the south, down a bushy slope, past a house, through a patch of woodland and over a field to an intersection with the main coast path. A short distance west, a lesser trail descends through more bushes to Ringstead Bay, here usually fairly or completely empty of people, unlike the much busier section to the west, at the other parking place. The beach at Ringstead Bay is mostly sand, backed by boulders, some big enough to provide shelter on windy days. Just east of the path is the Burning Cliff, an exposure of the Kimmeridge Clay that began smoking in 1826 after ignition of an underground fire in sulphur-rich shale layers, and was not extinguished for several years. 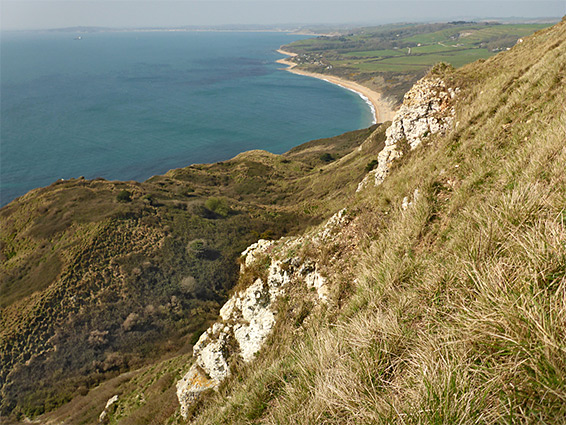 The eastwards coast path runs through a strip of woodland, past the tiny church of St Catherine's by the Sea, and a few houses, then enters open fields, along the upper edge of an old landslip zone, a pathless, overgrown area of little cliffs and hollows. It rises gradually as the White Nothe headland approaches, on top of which is an isolated block of cottages, once home to coastguards and their families, now privately-owned, notable for having no road access and no mains electricity. 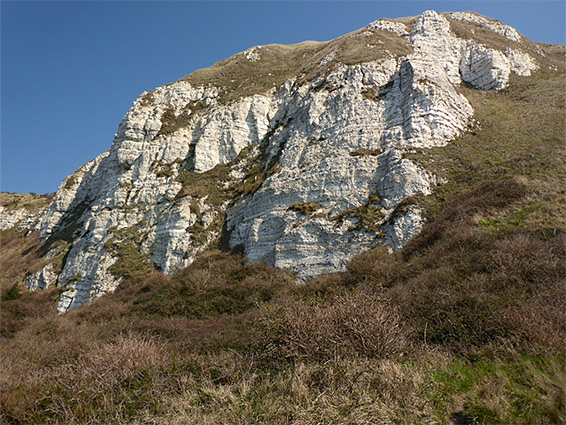 The coast path proceeds east, temporarily out of sight of the sea, while another path goes south to a viewpoint on the rim of the cliffs, next to a World War II pillbox, a two-story brick structure. Just beyond is the start of the Smugglers Path, which descends 500 feet over a quarter of a mile, initially across exposed, grassy slopes near the White Nothe formation, then into a bushier area, finally emerging to a narrow, stony beach, the place also reachable at low tide from Ringstead Bay. Scattered along the shore are many chalk boulders, large and small, including one named Split Rock. 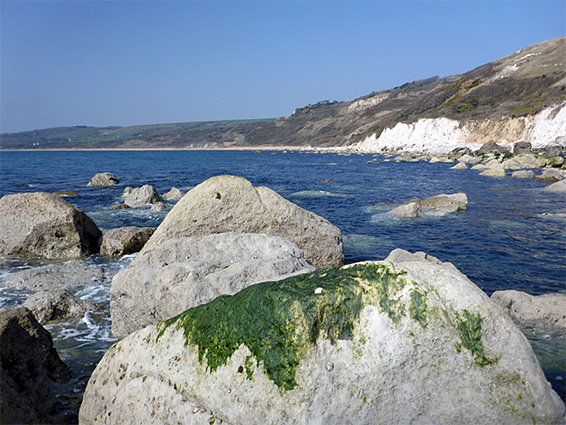 East of the White Nothe cottages, the coast path rises some more, rounds the edge of a grassy basin (West Bottom) then descends sharply to a larger depression, Middle Bottom, at its lowest point just 30 feet above a broad pebble beach, but there is no way to climb down as the chalk cliffs are still sheer. Next is another climb and another descent towards Bat's Head, where a little path goes right to the tip of the promontory. Durdle Door is now in view ahead, and the beach below is reachable in another 0.4 miles. 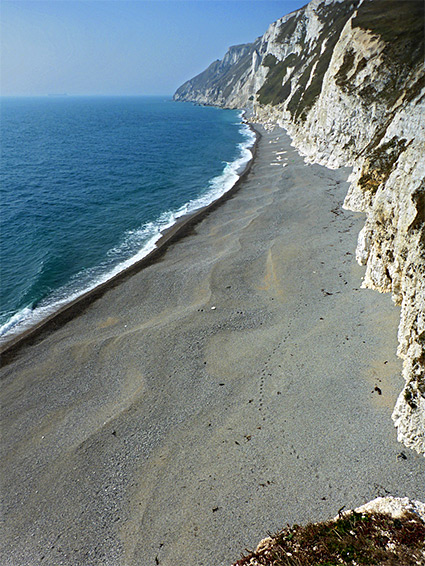