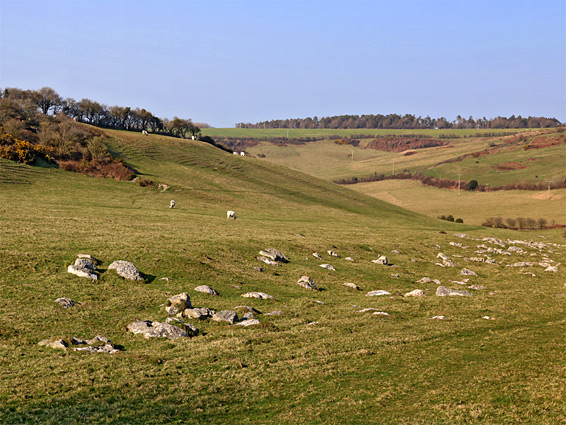 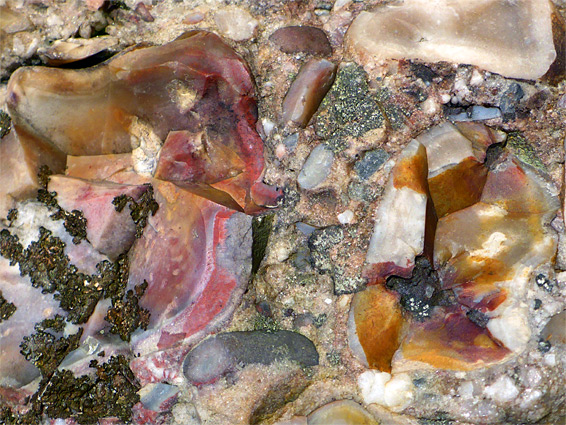 Like many national nature reserves, the Valley of Stones in southwest Dorset is not a well-known place, not signposted, and reached by cross-country walking from the surrounding minor roads. The reserve contains two dry valleys and the undulating, grassy slopes above, all underlain by chalk bedrock, from the Seaford, Newhaven and Lewes formations.

Part of the interest in visiting the reserve is the chalk grassland, which supports a range of wildflowers and butterflies, but the main reason for its creation is to preserve a 'train' of sarsen boulders along the floor of the southern valley, formed during the last ice age by weathering and silification of blocks of sandstone, from strata that overlay the chalk - the Poole Formation, on the ridgetop to the east. Fracturing and movement of the sandstone occurred during repeated freeze-thaw cycles.

The main band of stones is about a quarter of a mile long, on the valley floor, with smaller deposits on the slopes above. It is thought very likely that the stones were used in Neolithic times for monumental structures including stone circles, and standing stones like those along the Ridgeway, this an ancient travel route that passes by the valley one mile south. 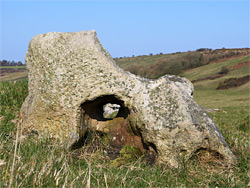 Stone with a hole 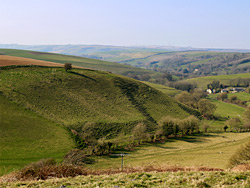 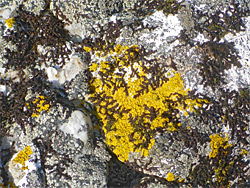 The nature reserve, which lies one mile north of Portesham, has (undesignated) roads on three sides and is traversed by one path (0.7 miles), between Littlebredy Farm and a crossroads on the west side of Black Down. Near the southern end of the path, just west of the crossroads, there is parking space for a couple of vehicles. Once through the fence beside the road, all parts of the reserve are reachable by cross-country walking. The lower portion of the floor of the main valley, leading to the farm, is excluded from the reserve, which comprises the sarsen area at the head of the valley, a side valley to the north, and about 2 miles of the winding slopes all around. Wildflowers on the slopes include autumn gentian, clustered bellflower and fragrant orchid, while adonis blue is perhaps the most attractive of the various butterfly species found here. The sarsens themselves are quite photogenic, mixed with flint modules which are sometimes brightly coloured, in shades of pink and orange. All the stones are covered with many types of lichen, some uncommon.