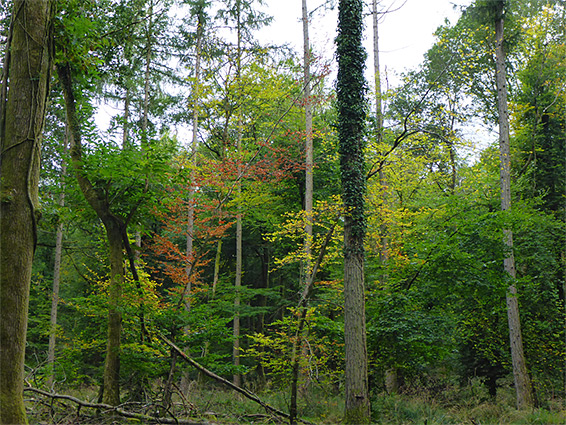 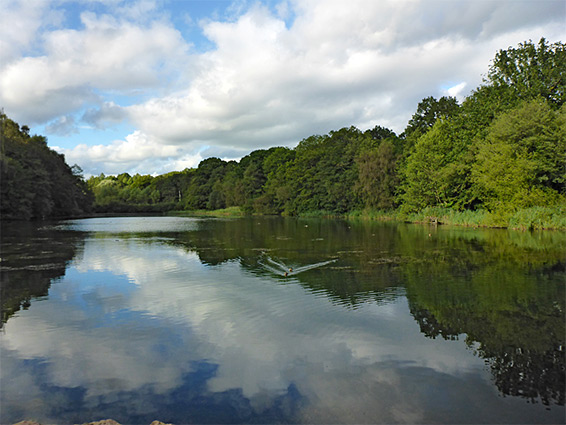 Loop walk through varied, mature woodland in the northwest section of the Forest of Dean, including Worgreens Lake and the Cannop Ponds

There are countless intersecting roads, tracks and paths in the Forest of Dean, and so many loop hikes are possible. One of the few official circuits is the 8 mile Beechenhurst Trail in the northwest section of the forest, visiting some of the oldest trees, a mix of coniferous and broad-leaved, through varied landscapes - open and overgrown, dry and moist, level and sloping, with some open areas, the largest of which is occupied by the Cannop Ponds, a pair of tranquil pools along the valley of Cannop Brook, good for wildlife.

One worthwhile extension, adding another mile, is a walk around the edge of Worgreens Lake, the largest body of water in the forest, and like the pond, protected as a Gloucestershire Wildlife Trust nature reserve. Also along the route are an arboretum, the historic (1676) Speech House, a working mine with museum (Hopewell Colliery), and Beechenhurst Lodge, which has a shop and cafe.

The route intersects main roads in four locations so could begin from any of these crossing places, or from the four main attractions on route. One good location for parking is at the entrance of a track just south of Worgreens Lake, along the B4226 0.6 miles east of Speech House - at the east edge of the loop, which is described below in the anti-clockwise direction. 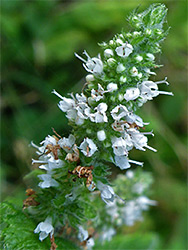 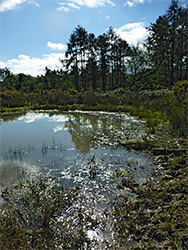 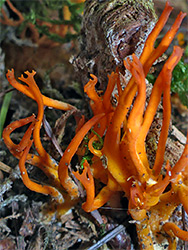 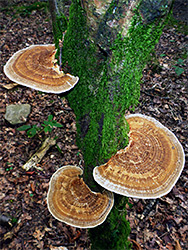 Worgreens Lake and the Sculpture Trail

The track from the parking place along the B4226 goes north a short distance through open pine woods to Worgreens Lake, which was created in the 1980s, occupying a former open-cast mining site, and has since been colonized with many species of plants and animals. The surroundings are a mixture of plantations and open patches of heath, adding to the habitat diversity. A path loops all around the shoreline; this is followed counter-clockwise through light woodland almost back to the initial junction but turning off to the west just before, on a path that links with the Sculpture Trail, another loop, opened in 1986, along which are various pieces of sculpture and artwork. This in turn links with Beechenhurst Lodge and Speech House. 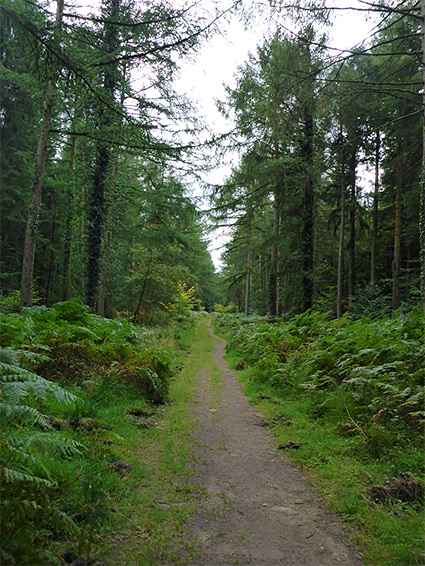 Straight track in the Buckholt Inclosure

The Beechenhurst Trail continues northwest through the woods, surrounded by gently undulating terrain, then across a cycle track - originally one of the numerous railways in the Forest of Dean - over Cannop Brook via a wooden bridge, and on to the B4234 (New Road). It climbs into the woods at the far side, fairly gradually at first then more steeply, past several more junctions before levelling out on a plateau and approaching another road, the A4136. The next segment of the loop is south, through the picturesque conifers of Buckholt Inclosure, round the head of a deep valley (Wimberry Slade), once a major mining centre, and across an open area of floral grassland, Lodge Inclosure. A short descent reaches the next road, B4226, along which is the working mine and museum. 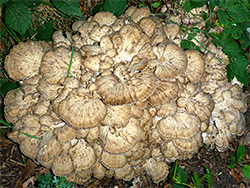 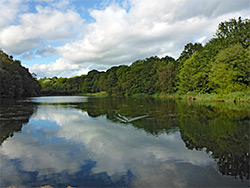 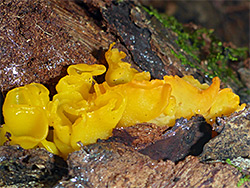 The trail climbs the valley side to the south of the B4226, follows a ridge eastwards, past a sandstone quarry, then drops down steadily on a fairly open slope, and over the B4234 again to a strip of land separating the two Cannop Ponds. It heads south along another old railway line to the far end of the southernmost pond before turning to the northeast, again through various intersections, turning right at one and left at another, eventually nearing Speech House and the Cyril Hart Arboretum, from where another half mile of paths reach the starting point, the track near Worgreens Lake. 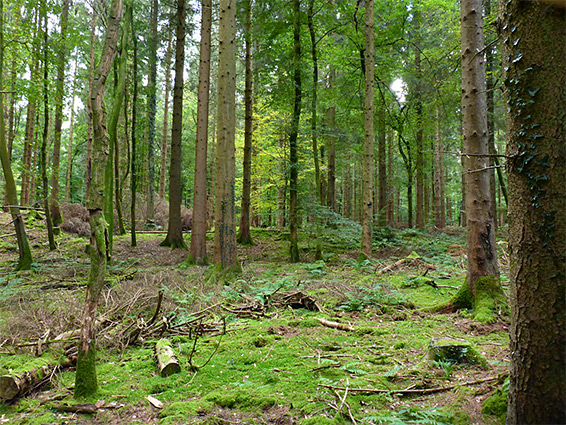