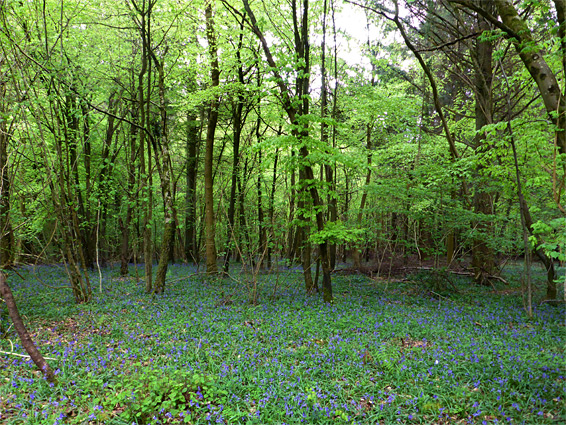 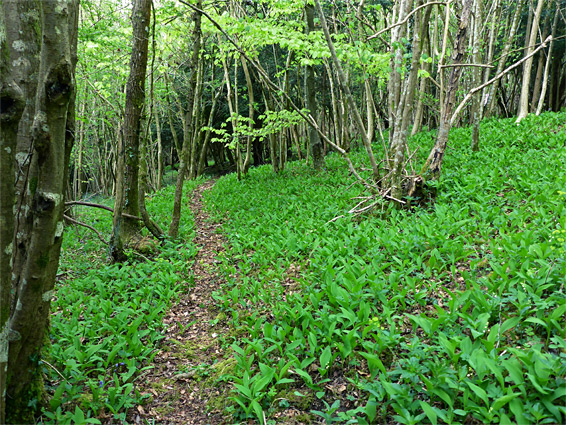 Ancient coppiced woodland, on sloping ground above the disused Severn-Thames Canal; many bluebells in the spring, and several rarer wildflower species

Siccaridge Wood is one of three adjacent nature reserves, the others being Sapperton Valley and Daneway Banks, along the River Frome five miles east of Stroud, and it contains 67 acres of ancient, coppiced, broad-leaved woodland, on the top and sides of a limestone ridge, between the main valley to the south and a small tributary (Holy Brook) to the north.

The wood, for several centuries part of the Bathurst Estate, has been used as a source of timber since at least the 1500s, and while only a few really old trees remain, mostly pedunculate oak, the arboreal vegetation includes a good mix of ages and species, principally beech, silver birch, hazel and ash, and the relatively undisturbed nature is evidenced by abundant indicator species of ancient woodland, including primrose, bluebell, wild garlic, violets and wood anemone, plus several rarer varieties. Of these, most widespread is lily-of-the-valley, while also present are herb paris, angular solomon's-seal and birds nest orchid. Dormice, birds and butterflies are the main animals. The wood also has a particularly varied selection of fungi. 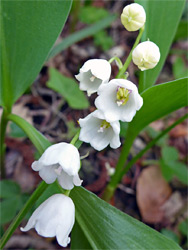 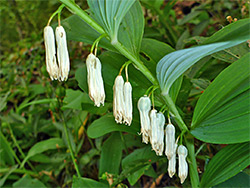 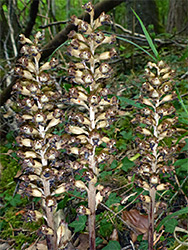 The east side of the wood borders the road between Daneway and Waterlane, and along here are three footpaths into the reserve, one running along the north edge, on the floor of the tributary valley, another (Morley Ride) following the ridgetop and the third crossing the south-facing slopes. This latter path branches off the Frome valley route, beside the disused Thames-Severn Canal, the centrepiece of the Sapperton reserve. There is parking for a couple of vehicles at the start of the ridgetop path (opposite the entrance to Daneway Banks), and more space a short distance southeast of Daneway village, on the far side of the river bridge. 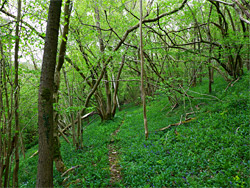 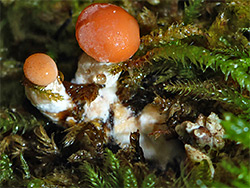 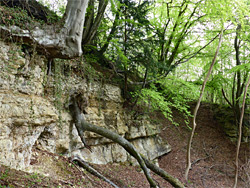 Perhaps the best way to see the woods is to walk along the crest of the ridge and return via the path across the southern slopes. The ridgetop path first passes through dense patches of bluebells, most colourful in April and early May, then enters a more open area with generally less tall trees, where a short spur leads north to a bench and viewpoint. Around here is an extensive grove of lily-of-the-valley, its position marked on the map at the nature reserve entrance, though the plant is also common in many other areas. The trail then descends gradually to a four-way junction near the west side of the wood; north leads to Holy Brook, straight on drops down a little more to Whitehall Bridge over the River Frome, while south then east is the return route, through generally more overgrown surroundings. This path also comes close to an old quarry, a roughly circular excavation lined by steep slopes topped by cliffs of pale-coloured limestone. Several short connectors link with the Sapperton Valley path below, alongside the old canal. 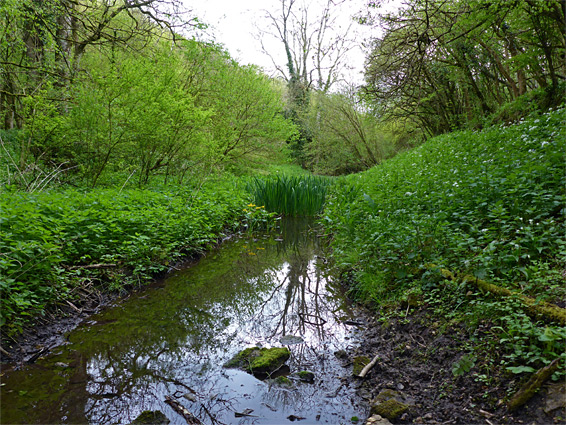