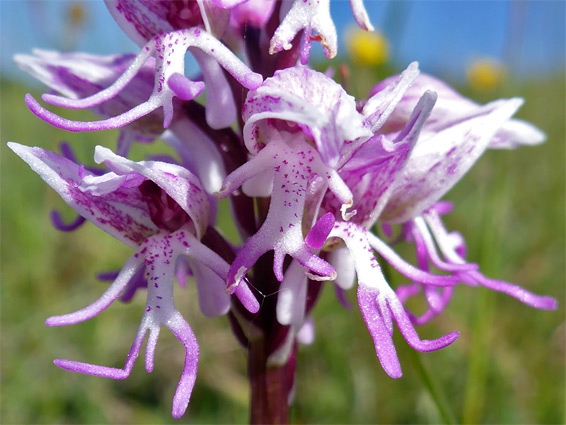 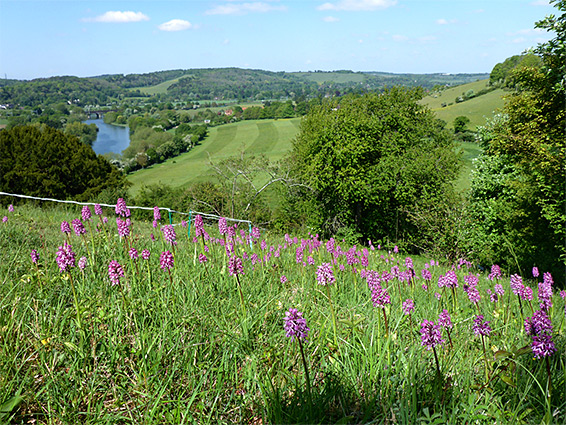 Calcareous grassland on sloping ground at the edge of the Chilterns, overlooking the River Thames - several rare plant species, including the monkey and lady orchids

Hartslock Nature Reserve contains a hundred acres of chalk downland on a southwest-facing slope at the edge of the Chilterns, overlooking the River Thames, and is notable for the beautiful, long distance views up and down the meandering valley, though is most famous for its wildflowers, in particular two species of orchids, amongst the rarest in the UK, the lady orchid and the monkey orchid, this latter found at only two other sites in the whole country. In 2006 the two species hybridised to form new variant, the lady-monkey orchid, unique (in the UK) to this site, adding to the varied assortment of plants, which also includes such uncommon species as bastard toadflax, chalk milkwort, white helleborine and pasqueflower, this latter quite recently introduced.

The floral diversity is partly a consequence of the chalk soils, the sheltered aspect and the steep slopes, making the land unsuitable for agriculture, and extends to the surrounding woods, a mix of yew (the majority), beech and ash, where more shade-tolerant species grow including white helleborine and narrow-lipped helleborine. The nature reserve extends across the grassland and includes a small area of the adjacent woods, and is part of a larger Site of Special Scientific Interest, and also incorporating more of the trees - Paul's Grove to the east and Hartslock Wood which borders the river for over half a mile downstream, and which gives the reserve its name. This in turn derives from the now vanished Harts Lock, across the river just downstream.

The nature reserve has a secluded, rural setting, one mile from the small town of Goring, and for much of the year is peaceful and lightly visited, but becomes somewhat busier during the monkey/lady blooming season, from late April to late May. Other grassland orchids, in flower later in the year, are bee, fragrant and pyramidal. 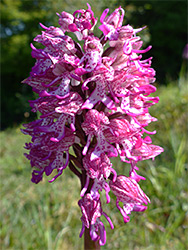 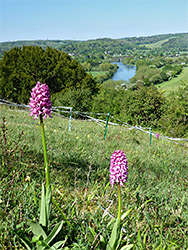 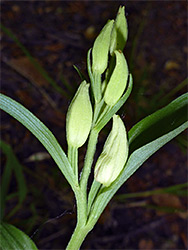 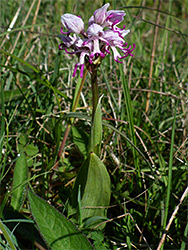 A narrow lane leads past the reserve entrance but there is no room for vehicles to park here, so all visitors are advised to walk from Goring town centre, a distance of 1.5 miles. The usual walk is all along Gatehampton Lane, which starts from the B4526, near the railway station, while an alternative approach is via a track that forks off the lane, later narrowing to a path - the Thames Path, running right alongside the river, and accessing the southern entrance to the reserve, linked to the main gate by a short, steep path through a field. This field, on the western edge, is separated from the main part of the grassland by a narrow belt of trees and bushes - another path crosses this, climbing slightly and soon reaches the main orchid area, then continues, through a fence into a second field, containing the highest point of this reserve, and on into a larger, third field, extending across a small valley. 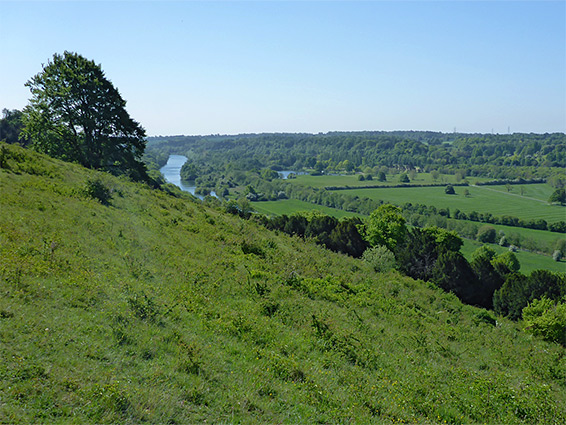 The most prominent of the special orchids are the lady-monkey hybrids, with many dozens in a dense patch between the path and the woods to the north. The monkey orchids are smaller and appear to be less numerous, and are also more spread out, while the lady orchids are the rarest, and seemingly do not bloom in some years. The main orchid areas, either side of the path, are loosely fenced off protection when the flowers bloom; a few stragglers may be seen elsewhere. White helleborine grows in the woods just beyond the hybrid patch, in a patch of trees named Hattonhill Shaw, shaw being a local name meaning small wood. Another path leads through the wood, emerging by the gate between fields two and three. DNA analysis has revealed the lady orchids to be similar to plants in southern France, and hence it is thought the species may have been introduced here, either deliberately or accidentally. The monkey orchids though are entirely native. The increasing rarity of the lady orchid may suggest that the hybrids are crowding out the original species. The monkey orchids were a few decades ago down to a few dozen plants, but now apparently number over 400, after years of careful conservation. 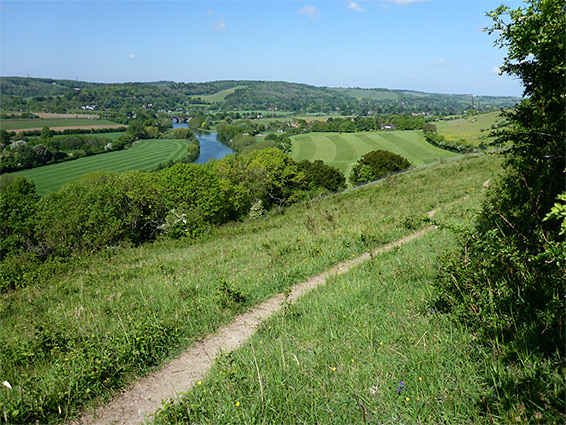