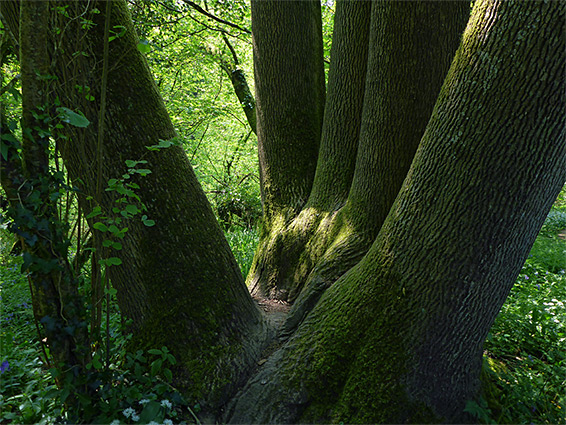 Two small streams, one forming a waterfall, flowing through narrow, wooded, steep-sided gorges, plus a pair of wildflower-rich meadows

Withial Combe, one of Somerset's more secluded and little-visited nature reserves, is situated on the south side of Pennard Hill, 5 miles east of Glastonbury. The hill is a low limestone plateau, rising about 300 feet above the flat wetlands of the Somerset Levels, and its sides are drained by several small streams, one of which (Bradley Brook) has eroded a narrow, steep-sided ravine densely filled by trees, creating a permanently cool, shady, moist microclimate, ideal for many species of lichens, ferns and mosses, plus the usual range of spring-flowering woodland wildflowers including bluebell, wild garlic and wood anemone.

The full half mile length of the combe is protected as a nature reserve, together with similar distance along a tributary ravine on the north side, also containing a stream; a generally shallower valley but with the added feature of a 15 foot waterfall. The reserve also contains two damp, flower-rich meadows, on the south-facing slopes of the hill.

There do not appear to be any particularly rare plants in the reserve, which is worth visiting due to the dense springtime display of wild garlic and to a lesser extent bluebells, and because of the shady ravines, the streams and the waterfall, generally atypical scenery for this part of Somerset though the county does have a few similar gorges including Ebbor Gorge and Stephen's Vale. 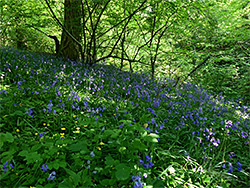 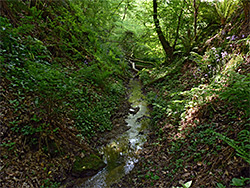 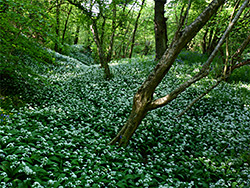 Withial Hill, a country lane, runs past the east end of the nature reserve, which is not signposted, identified only by an old sign (no map or information board), a short distance down the access path. On the verge is parking space for just a couple of vehicles. The path crosses a track to a private house then enters the upper end of the combe, through which flows a tiny stream, originating from a spring near the road. The ravine quickly becomes completely overgrown and inaccessible at stream level, with steep, slippery slides, so the path has to stay above, to the north, close to edge of the trees and within sight of the neighbouring fields. After about a third of a mile it descends gradually to creek level as the combe widens, at the point where the tributary stream joins from the north. The path then crosses via a bridge and rises a little to a field where it meets another path, which leads east and west across the adjacent meadows, the two contained within the nature reserve. Another path follows the northern stream a short distance to the waterfall, a relatively small feature though still quite impressive. The gorge below is not accessible from the vicinity of the falls, instead only by walking and wading upstream from the confluence, something not recommended. The lower reaches of the combe, below the bridge, are also pathless. 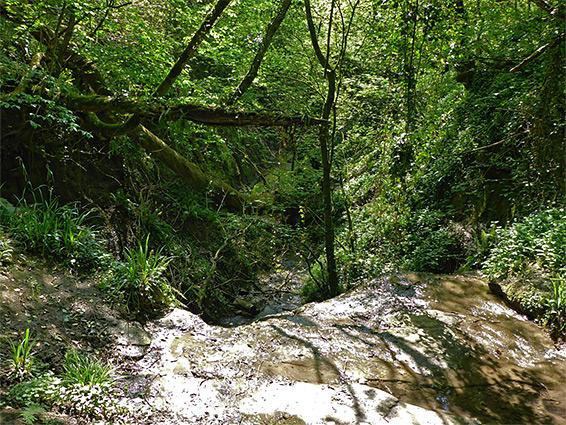