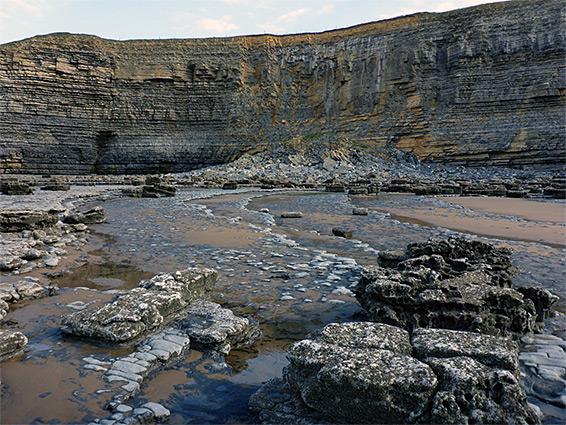 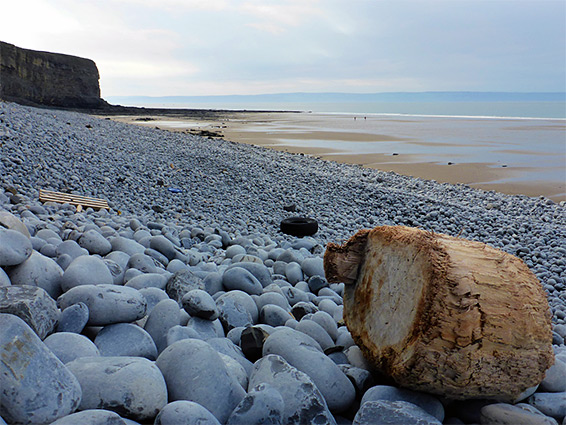 Cliffs, terraces, beaches and rock pools along a three mile stretch of the Glamorgan Heritage Coast, plus a stream (Nash Brook) with travertine formations

Management
Vale of Glamorgan Council
Parking
Nash Point, 4 miles west of Llantwit Major
Walk
7 mile loop, northwest along the beach and back southeast along the coast path, including a side trip up Cwm Nash
Photo Tour (53 images)

The three miles between Nash Point and the valley of Cwm Mawr is as scenic as any along the Vale of Glamorgan coastline, part of the 14 mile stretch known as the Glamorgan Heritage Coast, rivalling the better-known Jurassic Coast of Dorset and Devon for its rock formations and layered cliffs. The rocks are blue lias, variously grey, brown or bluish in colour, from the Triassic period, and they too sometimes contain fossils.

This part of the coast can be seen via longer walks from the northwest (see Dunraven Bay to Cwm Mawr) or the east (Nash Point to Stout Bay), or along a shorter walk, just this section - the route described below, taking around three hours. As usual the coastline can be followed either by a path, running above the cliffs, or by walking below at beach level, something possible at all times except perhaps around high tide, since there are no obstructions, no impassible rocks unlike some other stretches.

Apart from Nash Point there only two places where the beaches are accessible from above - the valleys of Cwm Nash after 1.3 miles (from Nash Point) and Cwm Bach in another mile, this latter a rather steep descent aided by two ladders. Cwm Mawr, a short distance north of Cwm Bach, is a hanging valley, ending with an unclimbable, 40 foot waterfall; the next route from beach level to the coast path is a third of a mile beyond, at the promontory of Trwyn y Witch (Witches Point).

Below the cliffs, the intertidal zone is a mix of flat limestone terraces, pebble beaches and extensive sands. The cliffs themselves are fairly unchanging, without quite as much variety of form as some other regions but still spectacular. 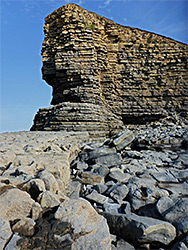 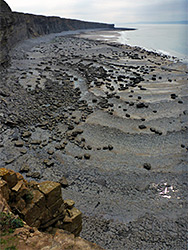 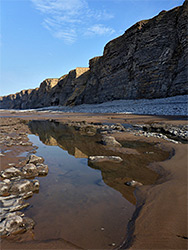 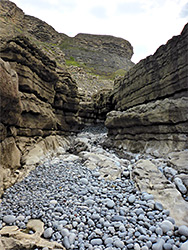 The usual start point is in the spacious parking area at Nash Point, a location provided with a gift shop and cafe, and also open to primitive camping, on grasslands right at the brink of the cliffs. Another option is a carpark at the upper end of Cwm Nash, a 0.6 mile walk from the beach, while the next access point northwards is at Dunraven Bay. 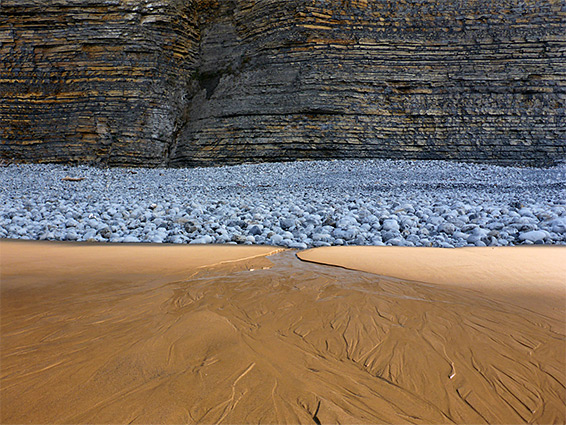 From the parking area at Nash Point, a short path winds down a grassy slope to the mouth of the adjacent Cwm Marcross valley, which contains a stream, flowing into the pebble beach at its mouth. The point lies just beyond; a narrow promontory of thin grey layers above terraces and jumbled boulders. On the far side, another mile of coast is revealed, as far as the next small headland, preceding the valley of Cwm Nash. The cliffs are similar in height all the way, around 200 feet, and unbroken, with a thin, sloping band of grey-white pebbles at their base, initially with limestone terraces below, until they give way to a sizeable patch of sand, dotted with many residual pools that reflect the cliffs, the northern part of which are named Craig y Beiri. 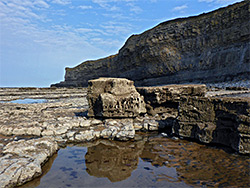 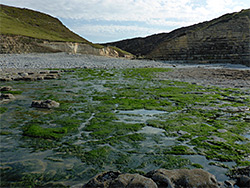 The sand gives way to terraces one more, containing many pools, and at one point the rocks are split by a deeper watery channel (Gwter Fawr), this just before the headland visible from Nash Point, overlooking the valley of Cwm Nash, which also contains a stream. The terraces below here are covered by seaweed, while just to the north is a small circular sandy beach, Traeth yr Aes ('Hayes Beach', also known as Monknash Beach), exposed only around low tide. The northwards views now extend to the bigger promontory of Trwyn y Witch, 2 miles away. 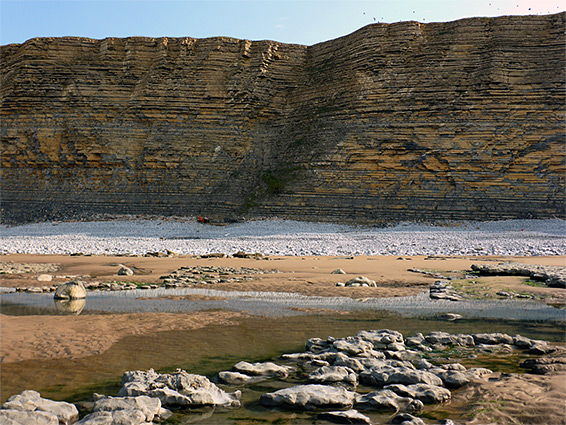 Reflections on a pool

The terraces on the far side of Traeth yr Aes are soon replaced by a mile of clean sand, Traeth Mawr (Great Beach), all backed by the same greyish-brown cliffs, largely uniform in appearance apart from occasional rockfalls at the base. The southern portion is known as Llechau Bara-Llawr. On the far side of the beach is a rocky patch, a smaller sandy beach (Traeth Bach), then more extensive terraces, past the small elevated valley of Cwm Bach, the lower end of which is steep though not sheer, accessible by the ladders up the rocky slopes. 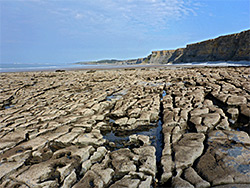 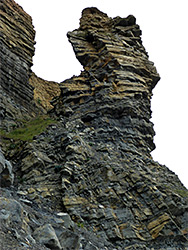 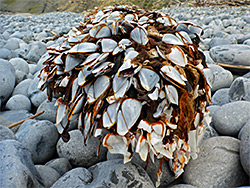 After Cwm Bach valley, the cliffs resume, still similar in appearance, the only notable feature being a stout pinnacle, also formed from the thin limestone layers, gradually eroding from the bedrock towards the cliff rim. The land dips down again not far beyond, at the lower end of Cwm Mawr, the stream from which forms a dispersed waterfall, dropping vertically down 40 feet over a moss- and seaweed-covered rockface. From here it is a third of a mile to Trwyn y Witch and the route up to the coast path, from where Dunraven Bay is a five minute walk away to the north. 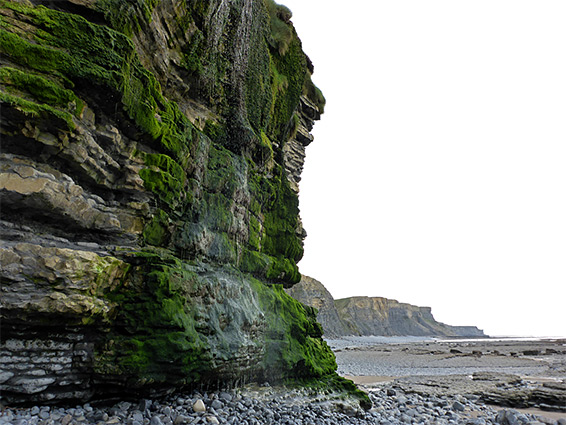 From Trwyn y Witch, the southeastwards coast path runs above the cliffs, which are generally lacking any bushy vegetation to obscure the seaward views; it drops down twice to cross Cwm Mawr and Cwm Bach, then continues in similar fashion to the larger valley of Cwm Nash. The next section is little different, another mile back to Nash Point, all the while running through a thin strip of undeveloped land between farm fields and the top of the cliffs, which are obviously eroding in some places. One worthwhile side trip is to follow a broad path up Cwm Nash, which soon enters wooded surroundings, rises steadily and eventually leads to the (alternative) parking place, near a farm. Towards the upper end of the valley is the photogenic ruin of an 18th century corn mill, right next to the stream, which above and below flows through a sequence of cascades and waterfalls over brownish travertine deposits, an unusual and photogenic landscape. The upper portion of the valley, around the waterfalls, is protected as Blaen y Cwm Nature Reserve. 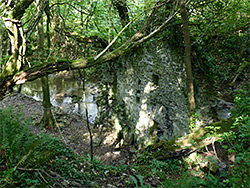 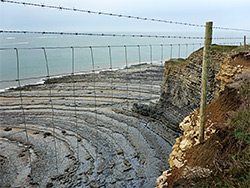