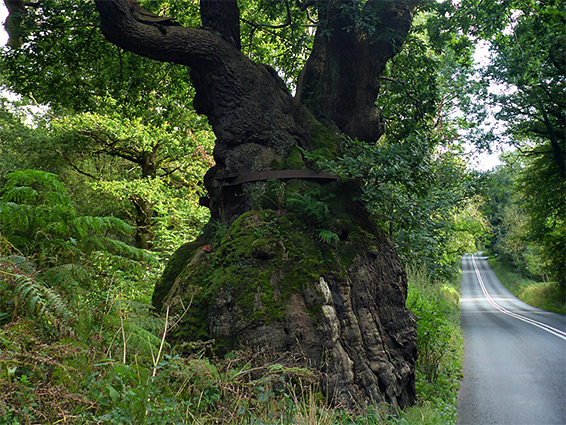 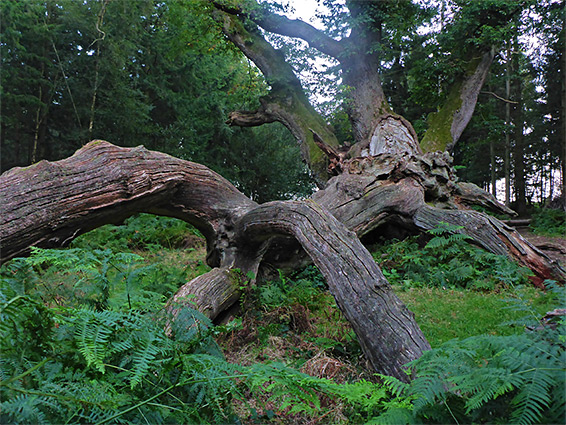 One of the largest wooded areas in southern England, containing hundreds of veteran beech and oak trees, some 1,000 years old. Crossed by many tracks, allowing for loop walks of up to ten miles

Savernake Forest is one of the largest wooded areas in southern England, extending nearly four miles southeastwards from the edge of Marlborough, bordered by the A346 on one side and the A4 on the other, and containing elevated, fairly level ground within the North Wessex Downs AONB, underlain by clayish or sandy soils above chalk bedrock. The land is crossed by a few shallow valleys, essentially dry - the soil is often only wet, with frequent boggy patches, but there are no major streams or springs.

Trees in the forest are mostly beech and pedunculate oak, and some of the oaks are around a thousand years old; although conifer plantations cover some of the area, the majority is undisturbed ancient woodland, established here since at least the 12th century when it was a designated Royal Forest, used for hunting and grazing. At that time the land was a mixture of heath, pasture and tree-covered areas, but has become more continuously wooded in recent centuries. The forest includes hundreds of veteran trees, 400 or more years old - thought to be the highest concentration for any woodland in the whole of Europe.

The woods contain a reasonable variety of wildflowers including four species of helleborine (broad-leaved, green-flowered, narrow-lipped and violet) and is home to a good array of fungi, but the major appeal stems from its large size and undisturbed appearance, filled with trees of all ages, very photogenic all year but especially in the autumn. The woodland is also notable for the many rare species of lichens, growing up on the old oaks, and this is the primary reason for its designation as a Site of Special Scientific Interest.

Although all of Savernake Forest is open to visitors without restrictions (except on the first working day of the year, when access is prohibited), it is privately owned, by the Brudenell-Bruce family, Earls of Cardigan; the largest ancient forest in the country not in public ownership. Management has been transferred between the generations since soon after the Norman conquest, when the land was granted to Richard Esturmy, a sergeant to King William, its descent passing between families on several occasions after marriage of heiresses. 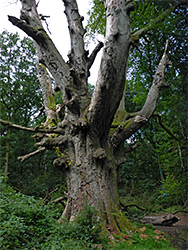 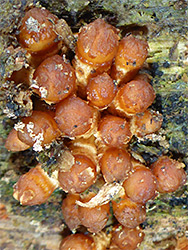 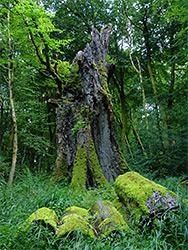 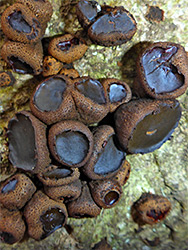 Many tracks and paths cross Savernake Forest, including a Roman road, and the equally straight Grand Avenue, the longest tree-lined road in the country, planted with beech in the late 18th century under the supervision of landscape artist Lancelot 'Capability' Brown. About halfway along is a symmetric, eight way junction approximately at the centre of the forest, the other routes being Sawpits Drive (southwest-northeast), Twelve O'Clock Drive (north-south), and Grand Lodge Drive (west-east). This intersection is 2 miles from the main parking area, at Postern Hill near the northwest end along the A346, just one mile from the centre of Marlborough. There is no charge for parking. Vehicles may also be left at the end of the two dozen or so tracks which intersect the two main roads, so there are many options for walking routes, and the numerous intersections allow for loop hikes of up to ten miles. 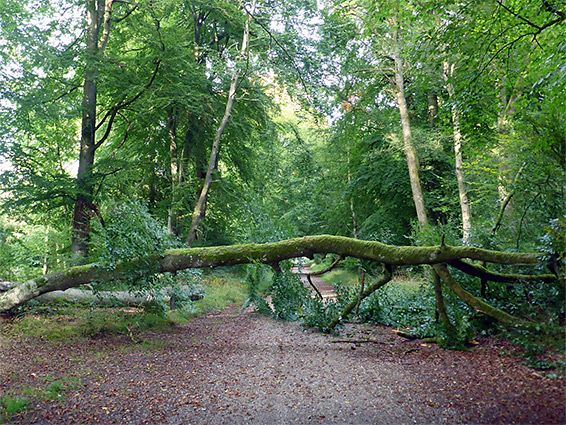 The veteran trees are well dispersed all across the forest, sometimes occurring in small groups, in other places standing alone, surrounded by much more recent growth. The conifer plantations are mostly found in the east, on the north side of Grand Avenue, furthest from Postern Hill; the majority of visitors explore the predominantly deciduous woodland on the south side of the avenue. Nearly all the tracks are wide, formerly vehicle routes, with just a few narrower pathways linking them. Signage is limited and it is quite easy to get temporarily lost. There is one historic structure within the forest, along Grand Avenue half a miles from the eight-ways intersection - an 90 foot tall column erected in 1789 by Thomas Bruce Earl of Ailesbury, as a monument to his uncle Charles. 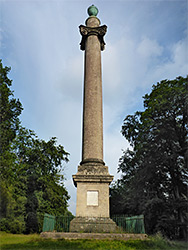 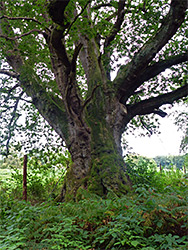 Oak at the forest edge 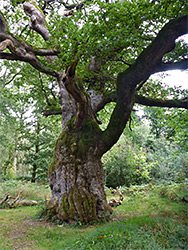 The Great Beech is one of the many veteran trees, but otherwise nearly all the most famous trees are oaks, and around 20 have been named, some identified with green plaques installed by the Forestry Commission. Most famous is the Big Belly Oak, 1,100 years old - the oldest oak in the country, its huge trunk hollow at the base and held together by a metal girdle, installed in the 1980s to prevent it from splitting. The tree has a rather precarious location just a few feet from A346, with no parking nearby nor any official trail. It may be reached by walking through the forest for 900 feet, parking at the entrance to a track (Charcoal Burners Road) to the southeast. All the other named trees are along (or very close to) tracks. 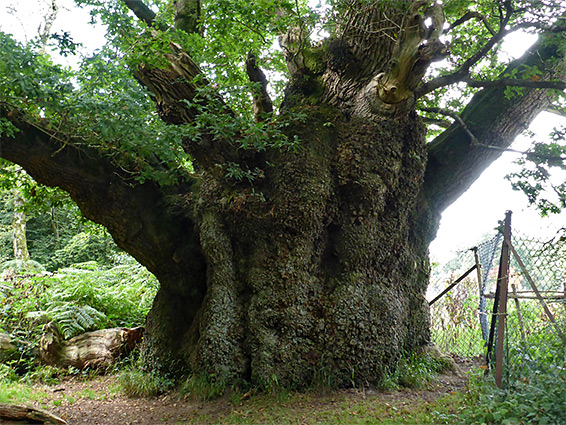 The closest named tree to the Postern Hill parking place, right beside the driveway, is the not too-impressive Bumble Oak, about 10 metres high, missing many of its branches. Another tree with a huge trunk is the Cathedral Oak which has a girth over 10 metres, located along the northern edge of the forest, beside the gardens of Seymour Place, and thought to be the second oldest in the wood - around one thousand years. Saddle Oaks 1 and 2 are named for the huge horizontal branches quite near the base of their trunks, formed as a result of pollarding several centuries ago. The two are close together, just north of a track (Long Harry), a short distance east of the intersection with Church Walk. 1.3 miles southeast, along a lesser track (Postwives Walk), are the King Oak, a recent designation replacing an older tree, the Original Queen Oak, the New Queen Oak, and the Spider Oak, this so-designated for its plentiful branches, though some have been lost in recent years. Most remote of the named trees, also one of the best, is the King of Limbs, along a track at the edge of Birch Copse near the east edge of the forest, another aged around 1000 years, with several huge limbs, some lying along the ground. White Road Oak, along a track of the same name, just north of the junction with Long Harry, is equally spectacular, one of the best in the forest. 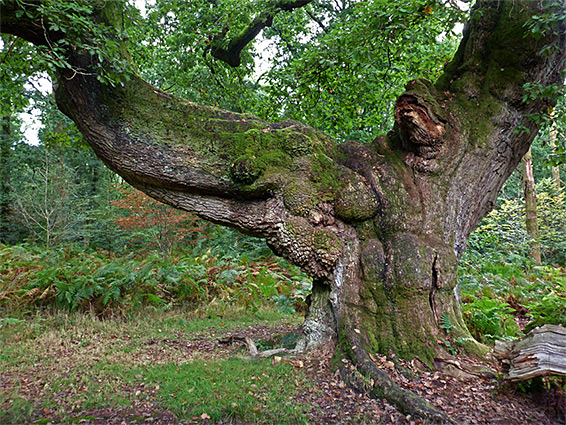