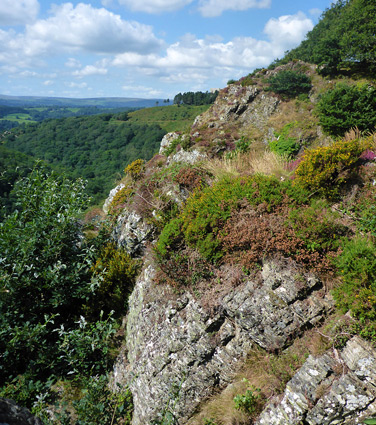 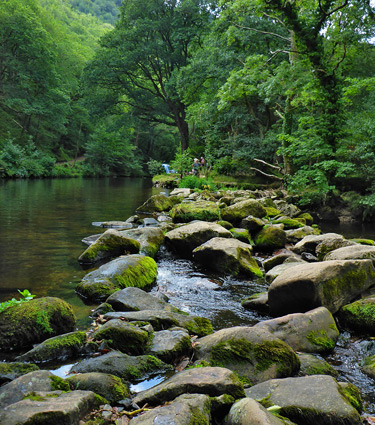 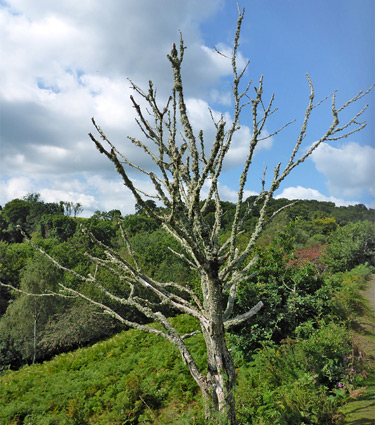 Two mile section of the River Teign, flowing through a deep, wooded gorge, above which are heather-covered slopes and granite tors

Location
Parking area (free) along the road to Castle Drogo; EX6 6PB
Management
National Trust
Walk
4.1 miles, loop, between Castle Drogo and Fingle Bridge - out along the slopes, back beside the river
Photo Tour (24 images)

For over six miles the River Teign flows through a wooded, steep-sided valley towards the east side of Dartmoor National Park, west of Dunsford, followed all the way by paths on one or both sides. The most spectacular, gorge-like section is the western end, the 2 miles from below Castle Drogo, a 1920s building set on a promontory overlooking the mouth of the valley, and Fingle Bridge, an ancient crossing point, site of a popular public house.

Within this section, the southern slopes of the valley are densely covered with conifer trees, of Hannicombe Wood and Whyddon Wood, while the north side is rather more open - woodland towards the river giving way to rocky slopes above, bearing heather and gorse, with two rocky outcrops, Hunter's Tor and Sharp Tor. Away from the gorge, most of the surroundings are a mix of farm fields and rough pasture; the unfenced moorland at the centre of the national park does not begin for a few miles upstream.

The Teign Gorge Walk, a 4.1 mile loop, is a popular route and can begin either along the entrance road to Castle Drogo, or from the dead-end road to Fingle Bridge. The upper section crosses the south-facing slopes of the gorge, treeless or only sparsely wooded, while the lower, southern section is right along the river, using one or other of the footpaths which follow each side. Attractions are the long-distance views, the rock formations and the heath-type plants on the upper path, and the river itself along the lower path; the Teign flows through moist, shady woodland filled with fungi in the autumn. The river is never particularly enclosed and forms no significant cascades, instead it meanders quite gently through tranquil pools and around big boulders, all the while lined by ancient trees. 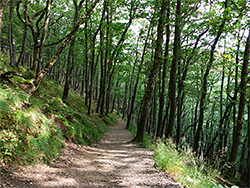 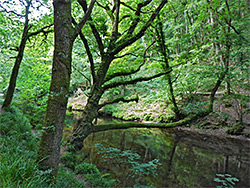 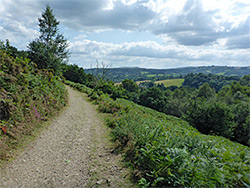 The road to Fingle Bridge has lengthy verges towards the lower end yet they still fill up with vehicles on busy days. The preferred start point for the loop is half way along the entrance road to Castle Drogo, where free parking is available in a field. From here several short paths head south and link with the main route across the north face of the River Teign Gorge. Turning left (east) this path soon passes the exposed granite of Sharp Tor, blanketed in heather, gorse and other flowering plants. Beyond are a few more rocky places as the route stays level, traversing open ground with just a few patches of trees, for 0.6 miles, until it passes through a gateway between two granite posts (Hunter's Gate) and enters Drewston Wood, containing mainly beech trees, where the trail forks, the right branch descending steadily, round one corner, and down to Fingle Bridge Road, joining it 600 feet from the point where it ends beside the river at Fingle Bridge Inn. Just south of the river are several meadows that make excellent picnic places, in addition to the garden of the pub. 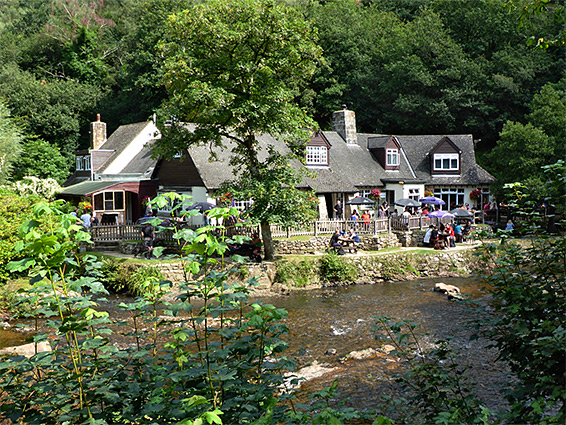 Fingle Bridge Inn, on the north side of the River Teign

The two westwards trails from the bridge are known as Fisherman's Path (north side) and Forester's Path to the south; both stay right by the water except for one section of the Fisherman's Path which climbs to cross steep terrain below Sharp Tor. Further west, this path affords a good view of Drogo Weir, built in 1928 to supply water to a hydroelectric plant (now disused) a short distance downstream, which can best be seen along the south-side route. This path starts by following a narrow channel, Mill Leat, constructed in the 1600s or earlier and leading to Fingle Corn Mill just downstream, though this is long since disappeared. The leat originates 1,200 feet upstream of the bridge at Fingle Mill Head Weir, a line of stones that allows crossing of the river, at times of low water. The path then follows the main river for another 1.5 miles, to a footbridge that links with the northern route. One other feature of interest along the way is a lengthy section of wall up to ten feet high, built of granite rubble, enclosing Whyddon Deerpark which was established around 1560; the wall may also date from this period, or it could be somewhat later. 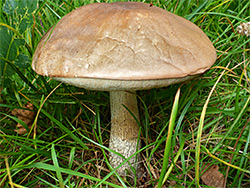 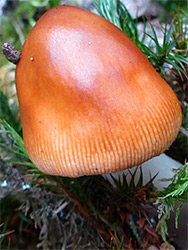 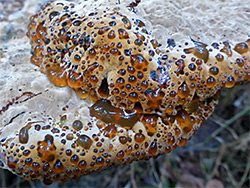 From the footbridge, near the settlement of Combe, a path leads north up a little valley, through some woods to a junction 0.4 miles from the river; here another path angles back south, climbing more steeply to a promontory, Hunter's Tor, then turns east across more open slopes (Piddledown Common) towards Sharp Tor, along the way meeting the spur paths that lead back to the Castle Drogo parking area. 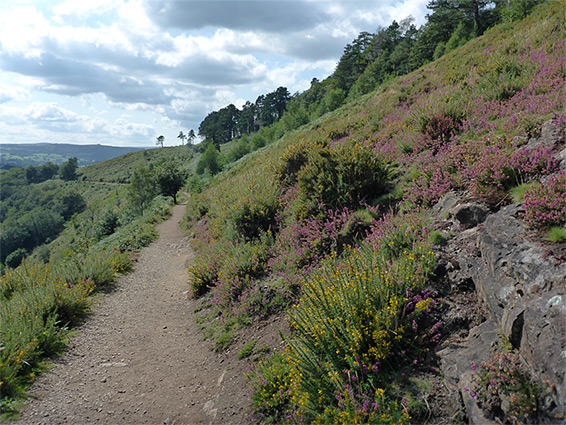