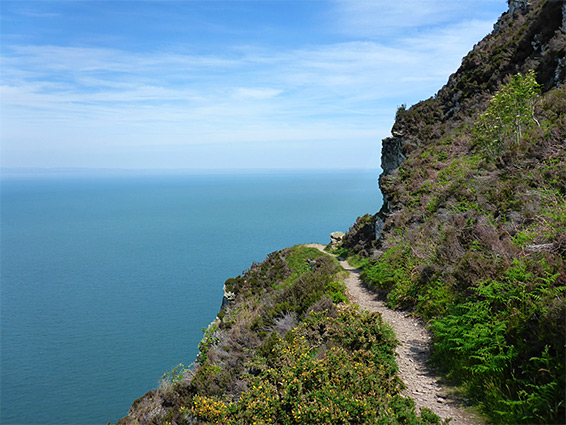 Two miles of the Devon coastline, followed by the coast path high above the sea, including the rocky headland of Highveer Point and the valley of Hollow Brook, which forms a tall waterfall, viewable by off-trail hiking

The most cliff-bound section of the north Devon coast, with the least shoreline access, is between Lynmouth and Combe Martin, a ten mile stretch where the land rises very steeply, by up to one thousand feet. Two of the very few places where the sea is reachable are Heddon Valley and Woody Bay, the former a relatively wide, nearly level river valley, the latter a secluded, wooded inlet, and the walk between the two is a good half day excursion, of 5.5 miles round trip - a loop, since the two locations are linked by parallel paths, crossing the slopes at different levels.

Start points are the paid National Trust car park in Heddon Valley, less than a mile from the sea, or a free area beside one of the roads above Woody Bay; this latter option allows a shorter loop (3.3 miles) just along the coastal section, as far as the rocky headland of Highveer Point, which overlooks Heddon's Mouth at the seaward end of the river valley.

The upper of the two paths was formerly a vehicle track, so is wide and has a gentle gradient, while the lower route is steeper in places, also narrower, and rather more scenic since it is closer to the sea, though both run through woods for more than half the way. The higher path does of course have better long distance views.

One other feature of interest is a stream, Hollow Brook, which forms a pretty cascade just above the lower path. Below here it flows through a short, scree-lined valley (Hollow Brook Combe) and drops over a cliff to create a spectacular 150 foot waterfall which may be viewed close up by careful, off-trail scrambling, descending a precipitous grassy slope to one side, and potentially all the way to beach level, though the last section is rather more difficult and the whole trip is not particularly recommended. 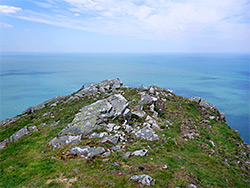 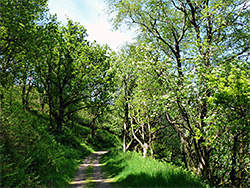 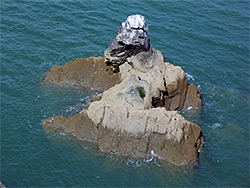 From the western start point, the National Trust parking place in Heddon Valley, the old vehicle track enters the woods on the east side of the River Heddon, shortly after which a path forks left; this is the main trail to Heddon's Mouth, reaching the sea after 0.8 miles. After 0.4 miles, another path branches off to the right, climbing steadily, and quite steeply, towards Highveer Point, leaving the trees as it approaches the headland. The track rises more gently, through the woodland, curving east to cross the broad side valley of Hill Brook, then also transitions to open terrain as it nears the point, in the vicinity of which is a 500 foot connecting path down to the lower route. The coastal section of the walk is described below, starting from the car park above Woody Bay. 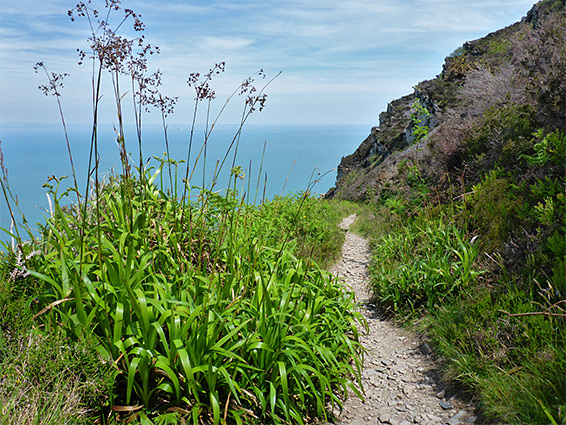 Wildflowers beside the coast path

The Woody Bay parking area is along a narrow road (Sir Robert's Path) east of Martinhoe, and it has spaces for around 20 vehicles. The upper level coast path starts 600 feet west, opposite a bend in the road, while the lower route begins a third of a mile away along another road that forks west just east of the parking place and descends towards the houses above Woody Bay - parking along here is for residents only. The upper path, the old vehicle track, enters the closely spaced trees of West Woodybay Wood, soon curving northwards whilst descending only gradually, generally without any sea views because of the dense woodland. It swings back to the south to cross Hollow Brook, near which the trees fade away, replaced by bracken and scrub, and here the coastline comes into full view for the first time. The path rounds the minor summit of The Beacon (820 feet), site of an ancient hillfort, and continues, now fairly straight, to the slopes above Highveer Point, where it leaves the coast and heads south along Heddon Valley, descending to the National Trust car park. 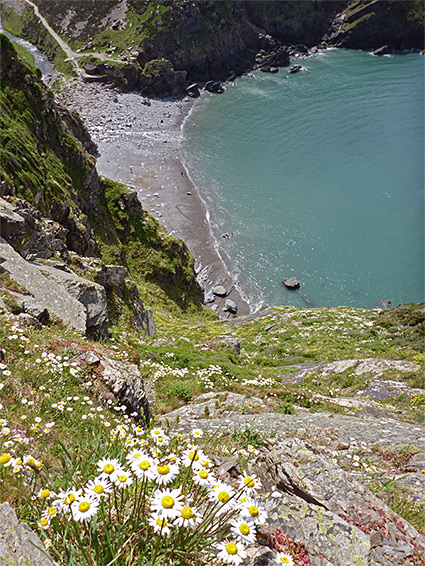 Daisies on the steep slopes above Heddon's Mouth

Just as the track bends south into Heddon Valley, the short link trail leads down to the lower alignment of the coast path, the easterly portion of which forms the return leg of the Heddon Valley - Woody Bay loop. To the north, a rocky spine drops steeply down towards the sea, followable for around 800 feet, to a fine viewpoint above Heddon's Mouth, near a sheltered, cliff-lined basin known as the Punch Bowl. Old maps show another seawards route, a path that heads due east from the junction then switchbacks down a gully, but this is no longer evident; instead, the actual (southeastwards) path stays between 500 and 600 feet above the sea, traversing steep and bushy slopes below The Beacon, later moving down a little further to cross Hollow Brook, just below its small waterfall, then soon after entering wooded terrain and meeting the road to the settlement of Woody Bay, from where the parking area is a short walk uphill. 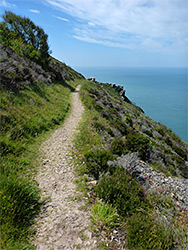 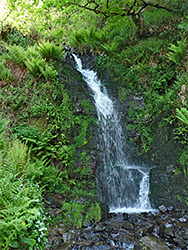 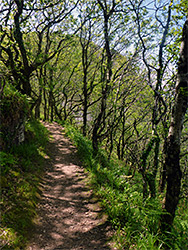 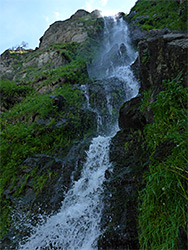 Top of the falls

The much taller waterfall at the lower end of Hollow Brook can be viewed by first leaving the coast path on the west side of the stream and descending a lightly vegetated scree slope, crossed by a very faint trail, down to the overgrown rim of the cliffs at the brink of the falls, close to the stream, then veering west, under some wind-swept trees and down a steep grassy chute, parallel to the waterfall. This leads to the base of the main portion of the falls, below which are some smaller cascades as the stream completes its journey to the sea in a jumble of big rocks, not so easy to descend. 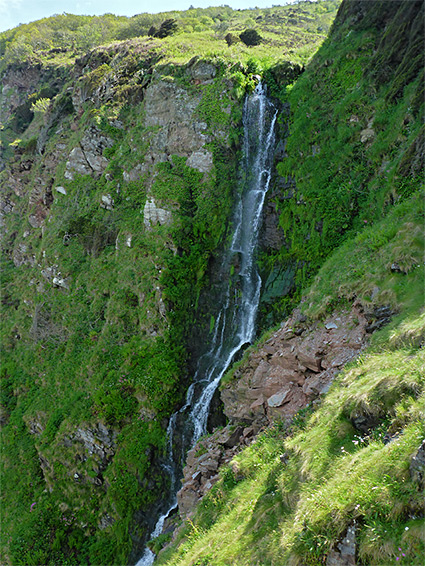