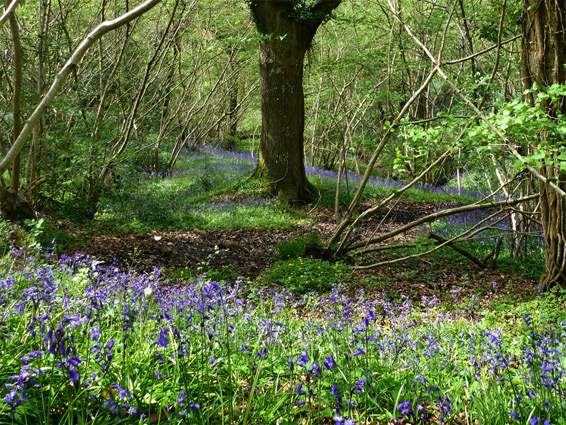 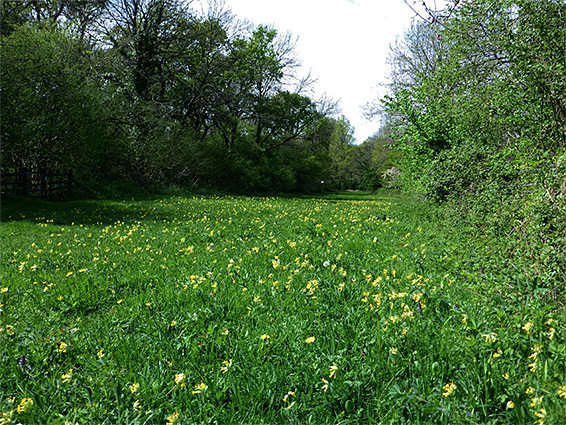 Ancient woodland on gently sloping ground crossed by a few tiny streams; in two sections, either side of a country lane. Also a small wildflower meadow

Hibbitts Woods is one of around a dozen nature reserves in Dorset that protect wooded areas, in this case two patches of ancient woodland either side of a narrow lane from the village of Halstock, 7 miles south of Yeovil, near the north edge of the Dorset Area of Outstanding Natural Beauty. The woods cover 22 acres of gently sloping ground, crossed by a few tiny streams which flow downhill to the west, and they are home to a typical range of indicator wildflower species including wood anemone, wood sorrel and, most widespread, bluebell, which densely covers many patches of the ground in late spring. Three orchids found here are the relatively common early purple and common spotted, and the rarer bird's nest. The reserve also contains a small meadow, adjacent to the road, which has a different selection of wildflowers, none especially rare.

The southern section of the word (South Clarkham Copse) is larger, moister and more overgrown; it may be explored along a 0.4 mile loop path. The northern section, originally two separate woods, the small North Clarkham Copse and the larger Harper's Hill Copse, has no path but is less densely planted so it is easy enough to walk around off-trail. The trees in both sections are mostly ash, with some oak and beech. Besides the wildflowers and the ancient trees, the reserve is also noted for butterflies, in particular the silver-washed fritillary, which appears in July. 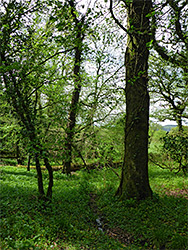 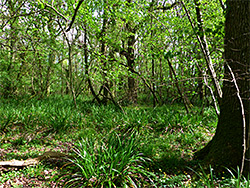 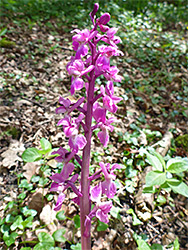 There is parking space for two or three vehicles on the south side of the lane east of Halstock, in the hamlet of Adam's Green, on a verge next to the reserve entrance. From here, a path crosses the east end of the wildflower meadow, where species include cowslip, speedwell and common spotted orchid, then enters the woods, and splits, at the start of the loop section. To the west, the path descends a little, coming close to a few seeps and streams, and returns across slightly higher ground to the east. The best bluebell section is in the northeast corner, though the most dense displays in the reserve are across undulating terrain along the west edge of the northern wood. This section of the reserve is accessed by a short path on the opposite side of the road from the parking area, running between two houses to a gate. These generally drier woods, with less ground vegetation, have more of the early purple orchid, often displaying a range of colours from deep purple to light pink. 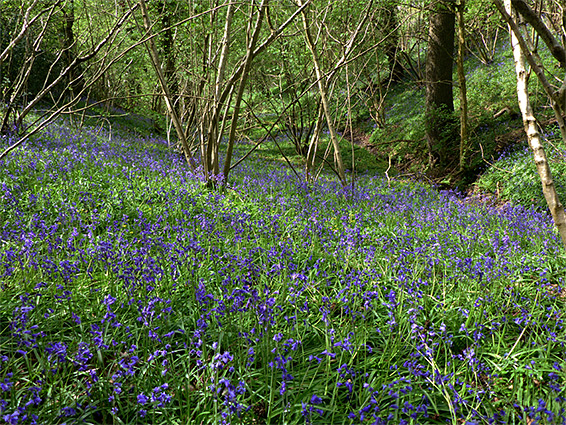 Bluebells beside a stream, in the north woods
All Contents © Copyright UK Southwest | Comments and Questions | Links | Site Map | Home