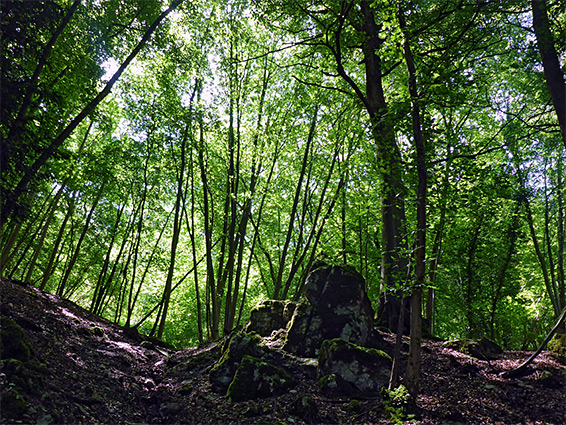 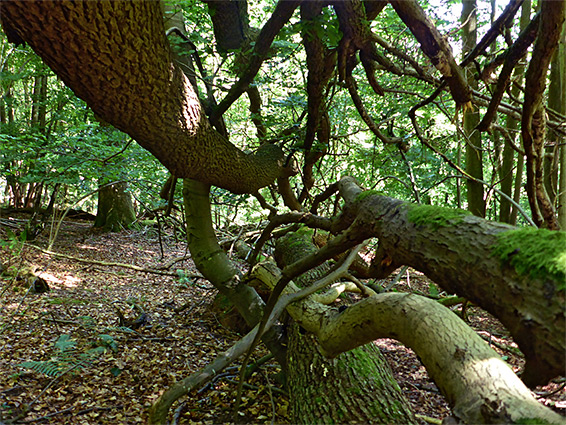 Ancient, broad-leaved woodland across a northeast-facing slope in the Wye Valley, with several rare plant species. Most of the reserve is accessible only via permit

Management
Natural England
Location
On the south side of the River Wye, 2.5 miles northeast of Monmouth
Selected Wildflowers
Bird's nest orchid, common gromwell, common toothwort, early purple orchid, greater butterfly orchid, herb paris, lesser celandine, lily of the valley, sword-leaved helleborine, tutsan, wild madder, wood anemone
Lady Park Wood, a National Nature Reserve, is just one small part of the extensive, ancient, broad-leaved woodland of the lower Wye Valley, a near-continuous corridor from Ross-on-Wye 20 miles south to Chepstow. The 110 acre wood spans the Wales/England border, Monmouthshire and Gloucestershire, and even though the majority is in Wales, the site is managed by Natural England, and is notable for being maintained in an entirely natural state, unaltered though continuously monitored since creation of the reserve in 1944 - although previously managed by selective coppicing, the trees are now undisturbed, to enable studies of how woodland develops without any human interference. The individual growth of over 20,000 trees has been recorded over the decades, all species typical of the Wye Valley, principally beech, ash, oak and lime, plus the smaller numbers of field maple, birch, yew, holly, whitebeam and alder.

The woodland floor displays the usual array of colourful wildflowers in the spring, the common indicator species of ancient forest, including bluebell, wild garlic, wood anemone and wood sorrel, while in summer a number of less common species are blooming, the rarest examples being two orchids, sword-leaved helleborine and narrow-lipped helleborine. Other interesting plants are bird's nest orchid, greater butterfly orchid, lily of the valley, toothwort, stinking hellebore and Tintern spurge.

The trees are atmospheric, the whole place is very quiet and some parts have spectacular views down the steep slopes to the River Wye, however the majority of Lady Park Wood cannot be explored by the general public, as a consequence of its protected status; the main section of the trees is enclosed by a tall wire fence, intended to prevent access by grazing animals, with entry only permissible to authorised researchers. The fence is however broken in quite a few places due to fallen trees, and it seems that all the area is now being grazed by deer. Despite the restrictions, the adjacent woodland is identical in character, just lacking some of the rarer plant species, and the paths along the margins of the fenced-off section extend for several miles in all directions, allowing plenty of scope for woodland walks.

As with much of the Wye Valley, Lady Park Wood is also part of an Area of Outstanding Natural Beauty, a Special Area of Conservation Concern and a Site of Special Scientific Interest. 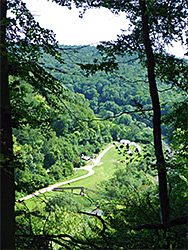 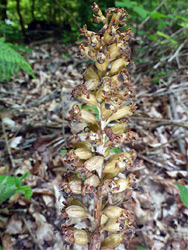 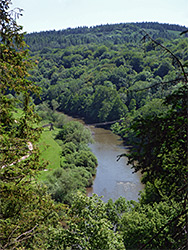 Lady Park Wood extends for 0.8 miles along the south side of the River Wye, 2.5 miles northeast of Monmouth, and can be accessed from at least five directions. The shortest walk is from the north, starting at the Biblins Youth Campsite, an activity centre next to the river on the opposite side, linked to the south bank by a rope suspension bridge. A small amount of parking for visitors is available near the end of the approach road, a 2 mile drive on narrow lanes from the A40, also passing several nature reserves including King Arthur's Cave and White Rocks. Other paths approach the wood from the northeast (Symonds Yat, 1.3 miles), the east (Hillersland, 1 mile), the west (Hadnock Road, 2 miles) and the south (Staunton, 1.3 miles). 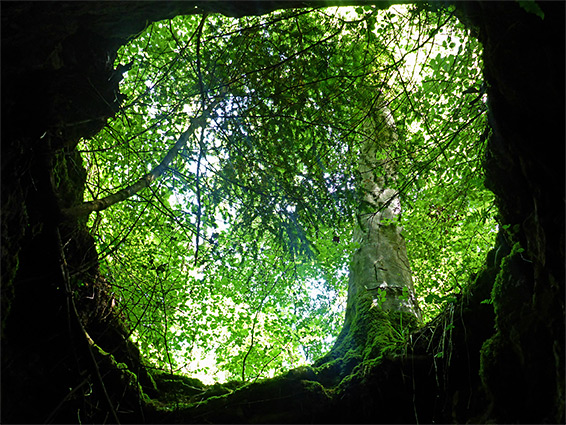 The main walk/cycle route through this section of the Wye Valley is on the south side of the river, below the north edge of Lady Park Wood - a wide level track (linking Hadnock Road to Symonds Yat), originally the Ross and Monmouth Railway. The Biblins suspension bridge meets this track towards the east edge of the wood, opposite the publicly accessible section, which is crossed by a path that forks southwards, climbing quite steeply up the valley sides, soon approaching a fence with locked gate, one of the two entrances to the larger, restricted area. The path continues climbing and links with another route that follows alongside the upper edge and later drops back down towards the river. The track from the locked gate leads right through the middle of the wood, descending gradually to a second gate along the northwest edge. The track is blocked by numerous fallen trees, having not being used by vehicles for nearly 80 years. This part of the woodland in general is moderately overgrown, with some bushy areas, but mostly larger sections where the floor is covered only by leaf litter. There are several small caves and other rocky outcrops, plus occasional more open areas, some close to the steepest section of the slopes, which allow views down to the river. 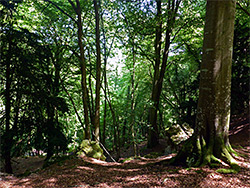 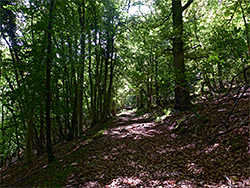 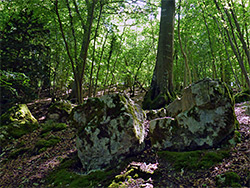