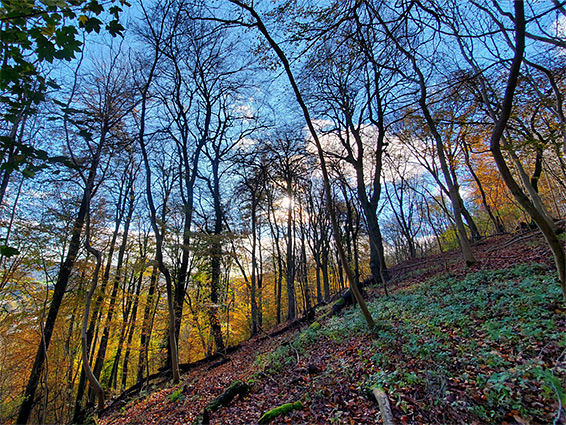 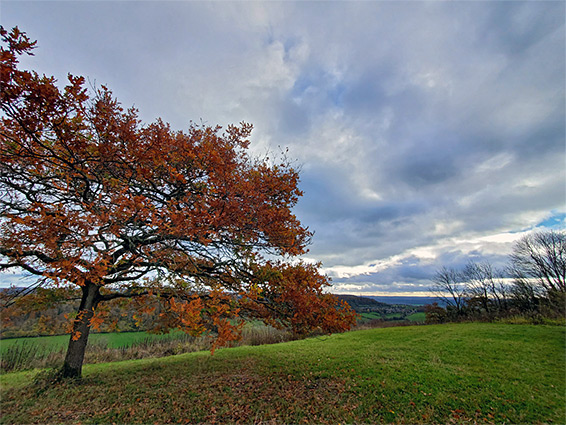 Narrow, level promontory at the west edge of the Cotswolds, with calcareous grassland and a golf course on top, and oak/ash/beech woods around the perimeter

Stinchcoombe Hill is a flat-topped limestone promontory, maximum elevation 719 feet, that occupies the western end of a relatively long and narrow ridge, projecting off the main Cotswold escarpment, just south of Dursley. The ridge is 3.5 miles in length, mostly level above, with steeply sloping, thickly wooded (mostly beech, ash and oak) sides, winding around a number of short combes, and is bordered to the north by the valley of the River Ewelme, and to the south by the smaller Doverte Brook. The hill, named after the village of Stinchcombe below to the west, affords great views to the north, west and south; a trail runs around the perimeter, and other paths traverse the wooded slopes all around.

Most of the top of the hill is used by the local golf club, but there are sizable patches of undisturbed limestone grassland where a good range of wildflowers are found including at least seven species of orchid. At one time the very rare early spider orchid occurred here, on a southwest-facing slope, but this has not been seen since 1998. The woods are home to many types of fungi and are especially colourful in the autumn when the beech leaves are changing colour. Paths enable loop walks of up to 4 miles, through the grassland and the trees. The focal point of the hill is its highest point - Drakestone Point, at the southwest edge, overlooking the Severn Vale. 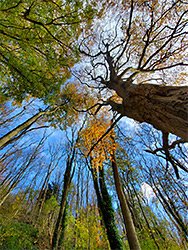 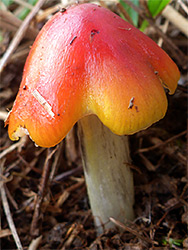 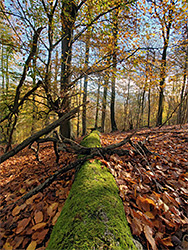 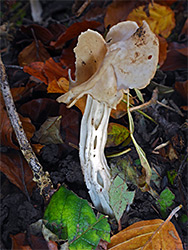 Stitchcombe Hill is dotted with a dozen or more ancient stones, and at Drakestone Point are some minor earthworks, either from a Norman castle or an Iron Age hillfort. More recently, the majority of the land was for several centuries part of the Berkeley estate, and at this time the woods were confined to a relatively narrow belt around the lower slopes of the hill, on slightly acidic soils from the Bridport Sand Formation; the upper slopes, and all of the top, was covered instead by rough grassland, underlain by the Salperton and Birdlip Limestone Formations. Named individual woods, all ancient in origin are, clockwise from the east, Cockshoot, Westfield, Sheep Path, Hillside, Bownace, Drakestone Piece (Yercombes) and Boisley. During the 20th century, the woods have expanded upwards and now cover nearly all of the slopes - other trees and shrubs found here include hazel, holly, elderberry, whitebeam and wayfaring tree. Several quarries were established in the 18th and 19th centuries and in Victorian times a rifle range was constructed on top of the hill, later dismantled and replaced, around 1890, by a golf course. The land on and around the hill was purchased in 1928 by Sir Stanley Tubbs, baronet and local MP, in order to restrict further development and preserve the natural habitats, though also to maintain the golfing facility. The place is now owned by Stroud District Council and is managed by a charitable trust. In recent years clearance of trees and scrub has been instigated to restore some of the views that had become obscured by the uphill spread of the woodland. 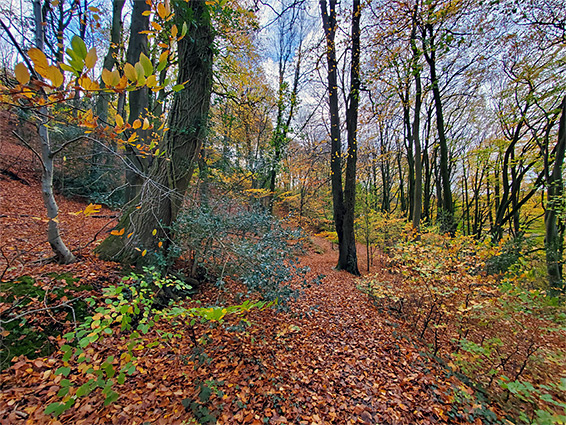 The colours of autumn, Hillside Wood

The B4066 runs below the west side of Stitchcombe Hill, and the A4135 through Dursley on the east side, from where various paths climb the slopes, but the usual access is from the road to the golf course, approaching from the southeast along the ridgetop, and ending at a large, free car park, close to the west rim, above Boisley Wood. Drakestone Point is off to the west, where the land narrows to a triangle of grassland, at the far end which is an isolated oak tree and a stone bench, a memorial to Stanley Tubbs, and, right at the tip, a fine overlook, across the Severn Vale to the hills of Wales. Other patches of unimproved grassland are found around the upper edge of the hill but the reminder is part of the golf course. The Cotswold Way crosses the point and loops around the upper edge of the woods, while other trails traverse the slopes below, on several different levels. The oldest beech trees would seem to be on the northeast side, in Sheep Path and Westfield woods but there are plenty of other locations including around the upper end of Hollow Combe, near the parking area.

View southwest over the Severn Vale, from Drakestone Point