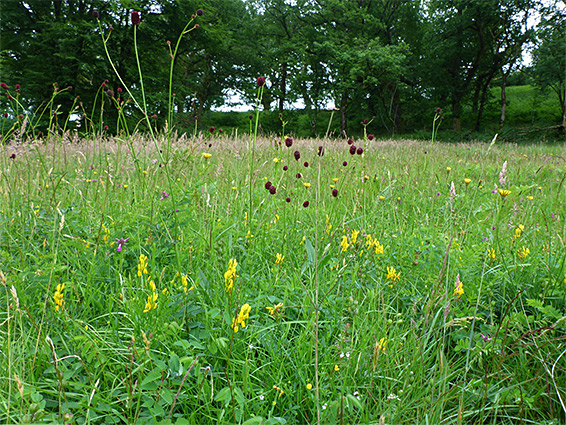 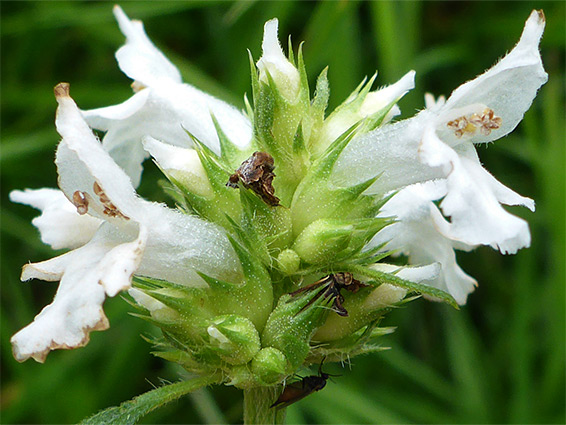 Two wildflower-rich fields of acidic grassland, on sloping ground above the Nant Irfon river valley; a remote location in the Cambrian Mountains

Vicarage Meadows is one of the more remote nature reserves in Wales, far from any main road in the middle of the Cambrian Mountains, towards the upper end of the Nant Irfon, and bordering a much larger protected area, the Nant Irfon National Nature Reserve. The meadows, also a Site of Special Scientific Interest, are managed by the Wildlife Trust of South and West Wales, and consists of two fields of acidic grassland on sloping ground on the west side of the river valley; one is rather wet, with springs and marshy patches, while the other, at higher elevation, is drier, and contains a great array of wildflowers, having been maintained as a traditional hay meadow for several centuries.

By far the rarest wildflower is the small white orchid, pseudorchis albida, blooming in May and June, here in one of its southernmost sites in the country, while other notable species are heath spotted orchid and wood bitter-vetch.

All the area is peaceful, very little visited, and scenic, with views across the valley to the surrounding hills. Both fields are grazed by Exmoor ponies, the wetter portion most of the year, the wildflower meadow towards the end of summer, while the meadow is also managed to reduce growth of bracken and scrub. A visit involves a walk of about a mile and up to two hours could be spent here, looking for the various plants.

The fields are so-named as they were in long-ago times owned by the local vicarage, who organised a hay crop each year and kept both cows and horses on the site, one remnant from this time being a small stone hut used as a milking parlour. 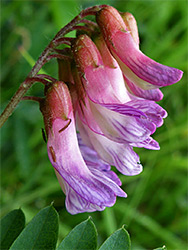 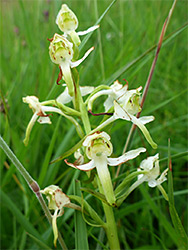 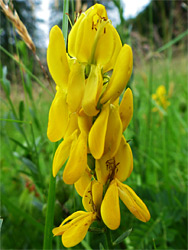 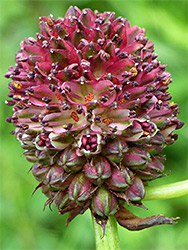 Vicarage Meadows Nature Reserve is situated on the opposite side of the Nant Irfon from the village of Abergwesyn, reached by un-designated roads five miles north of Llanwrtyd Wells on the A483. A suitable parking place is on the west side of the bridge over the river a short distance along a gravel track to the north, just beyond a gate. From here, a path traverses a grassy area close to some buildings adjoining the river, over the tiny stream and up to a fence and gate at the entrance to the reserve, marked with a WTSWW notice. 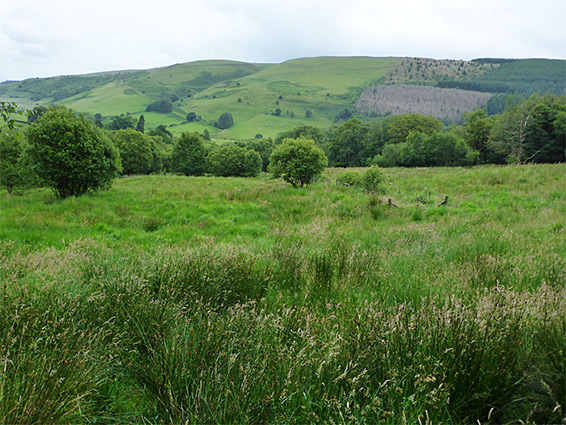 The path from the entrance passes the old stone barn, beside which is an information board, then leads across the first, larger field, at one point via a wooden boardwalk to traverse a boggy area where bog asphodel grows, together with various sedges and rushes. It later climbs slightly to another gate and a line of beech trees, into the second field, the wildflower meadow. The main flower area is in the upper portion, an approximately circular area 150 feet across, where the majority of species are in bloom between May and August. The rarest species, the small white orchid, may number fewer than ten plants, and can be hard to spot, though all other species here are relatively numerous. At the upper edge of the field a gate leads to the national nature reserve, and another path, which leads through woodland for a short distance, the edge of a huge plantation extending several miles west, then soon peters out. 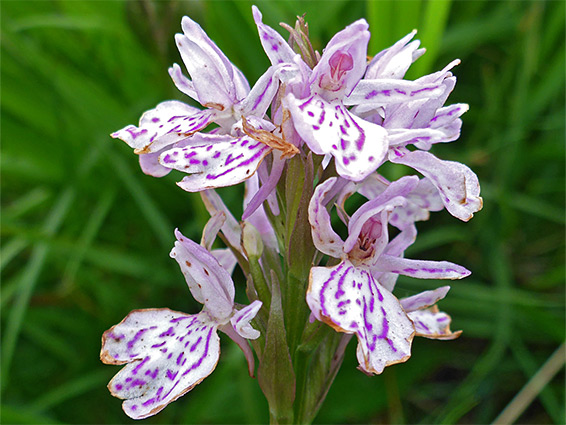