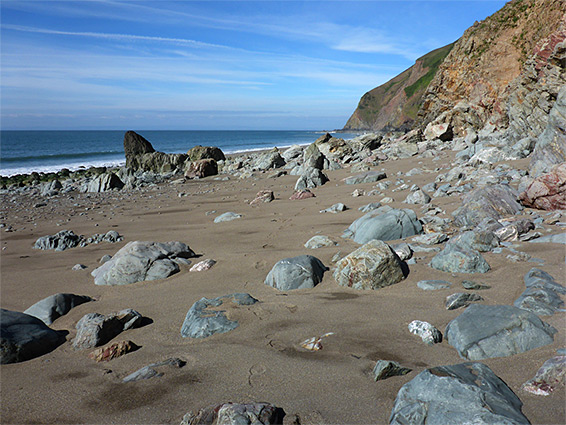 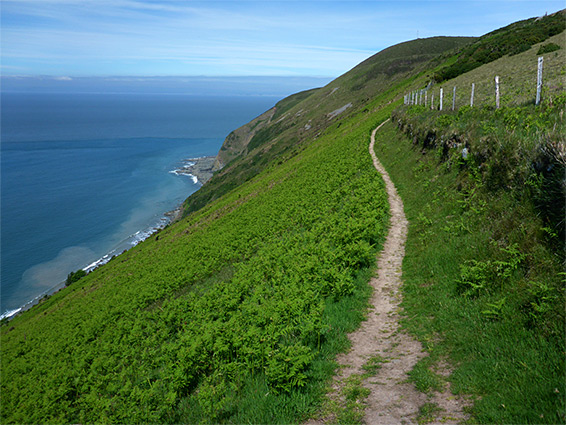 2.5 miles of north Devon coastline, from a high headland to the mouth of the River Lyn; viewed from above on the coast path and below by walking east at sea level from Lynmouth

The 2.5 miles between Lynmouth and Foreland Point is typical of much of the north Devon coast within Exmoor National Park - a narrow intertidal zone of sand, pebbles and rocks below cliffs and steep slopes, rising up to 1,000 feet less than a quarter of a mile inland. The point is a prominent headland, the northernmost part of Devon, and is guarded by functional lighthouse, quite far down the northern slopes, about 250 feet above sea level, and may be reached by the coast path, which to the east winds through mainly wooded terrain towards Glenthorne Beach and to the west traverses open, grassy slopes before the steady descent to Lynmouth, a picturesque town at the confluence of the east and west branches of the River Lyn.

Lack of trees and bushes mean that this stretch of the path has particularly fine views up and down the coast, and across the Bristol Channel to Wales. The beaches far below are not reachable from the path due to the precipitous slopes; the only route down was closed in 2014 following a landslip that destroyed the lowest 20 feet, and there is no access from the vicinity of Foreland Point, however at low tide the shoreline is accessible by walking east from Lynmouth, through one rocky section (Perilous Point) passable for only two or three hours either side of low tide, and on to the lengthy beach of Sillery Sands, mostly sandy, beyond which are a few smaller patches of sand and a lot more rocks.

This part of the coast is best explored on two separate walks, one from the car park near Foreland Point along the coast path until it enters woodland towards the end of the descent to Lynmouth, and the other from town, heading east along the beach. 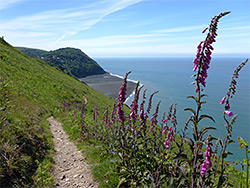 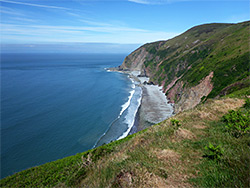 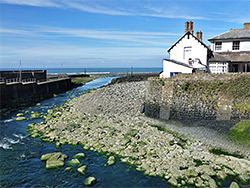 Foreland Point is served by a parking area at Barna Barrow, along the A39 a quarter of a mile east of the little village of Countisbury, which has a pub, church and bunkhouse. Several paths depart into the surrounding moorland, one climbing slightly to the top of Butter Hill, 992 feet, then descending more steeply and meeting the coast path, near a dramatic, red-walled gully known as Great Red, cutting through the Hangman Sandstone which forms all of the bedrock hereabouts. A short distance north is a junction, where the main coast path turns east and a narrower, more scenic section curves north, around the higher ground of Foreland Point and down to the lighthouse. In the other direction the coast path stays fairly level, traversing the grassy slopes below Butter Hill, coming close to Countisbury Church then heading west towards Lynmouth. It mostly follows fences or stone walls at the edge of fields, through a few gateways and stiles, all the while with uninterrupted views of the coastline. The path gradually moves closer to the main road before passing below an old quarry, rounding the upper end of a gully and entering woodland; the last half mile is all through the trees, near the road, with no more sea views. The path emerges at Lynmouth along a short side street just north of the A39. 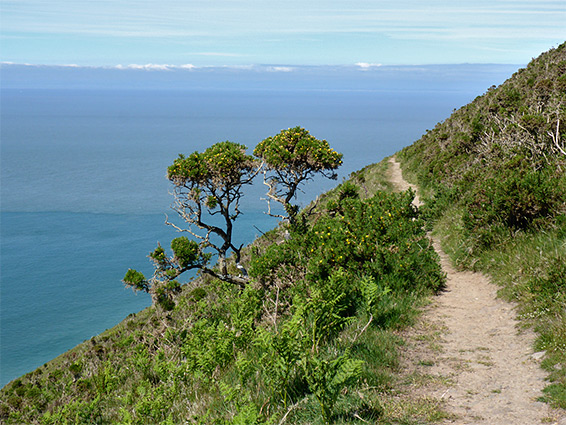 Trees by the coast path

A junction about halfway between Lynmouth and Countisbury marks the start of the abandoned path down to Sillery Sands; a notice announces the closure and cautions that the beach is now quite inaccessible. The path can still be followed even though it is quickly becoming overgrown and in summer at least some sections are barely identifiable. The path starts with a long straight across open ground, crosses a ravine and begins a long series of downward zig-zags, always through bushy surroundings. Some parts are still in good condition, with wooden steps and occasional benches, while others are narrow, steep and enveloped with branches. The ground becomes steadily moister, and varied wildflowers bloom in summer including abundant orchids (common spotted and early purple). The lowest section of the path angles down to an overhang with a drop of 20 feet below, site of the landslip; this is unclimbable, and there are no other nearby routes to the beach. 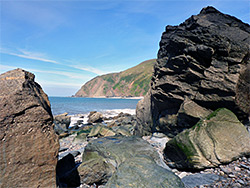 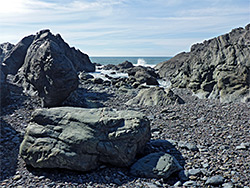 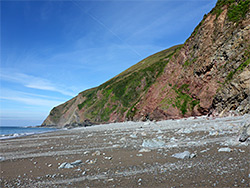 Lynmouth is a quiet and scenic village with a good selection of shops right along the seafront west of the River Lyn, with gardens and parkland on the far side. At low tide a band of muddy pebbles (Blacklands Beach) stretches 1,000 feet north, narrowing quite abruptly to the west and east; in this latter direction are several sandy patches, popular with beachgoers, before some big boulders (the Black Rocks), below Perilous Point, which is as far as most people walk. After the larger rocks are a third of a mile of smaller sandstone formations with several caves and vertical-walled channels before another brief narrow section, passable only around low tide, beyond which the rocks give way to the Sillery Sands; once a popular naturist beach but now rarely visited since the access path is blocked. A few tiny streams trickle down from above, and the clean-looking sands are backed by twisted, eroded rocks, mostly coloured shades of red. The sands extend for nearly a mile, interrupted by two rocky exposures, named Lower Blackhead and Upper Blackhead, before a more extensive rocky band leading towards the base of Foreland Point, which is essentially impassable at beach level. 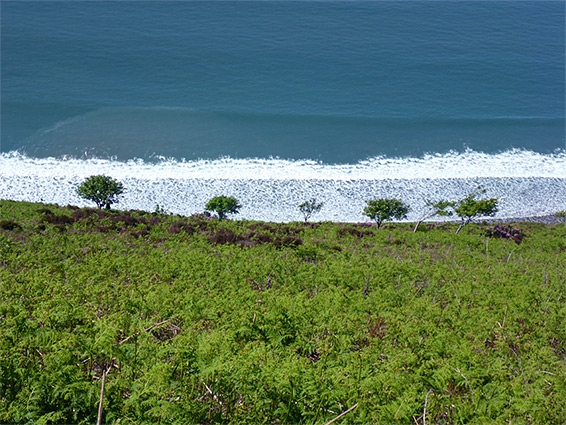