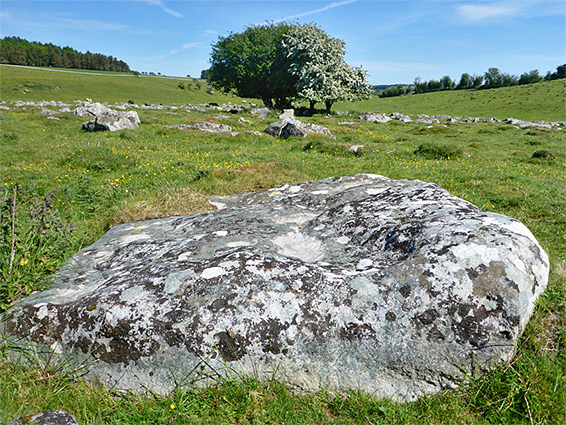 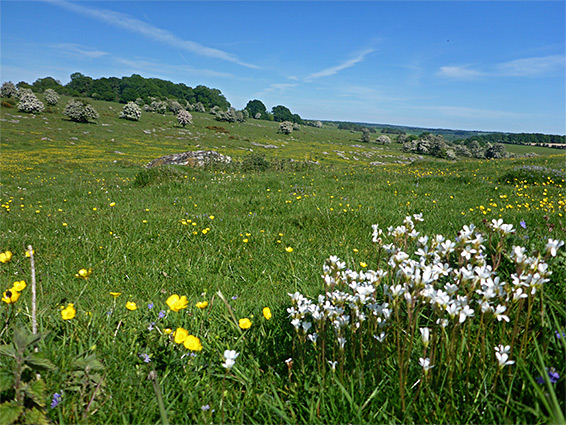 Remote chalk grassland, not close to paved roads, with varied plant life, and numerous sarsen stones, source of those used for the construction of Avebury and Stonehenge. Also the Devil's Den, an ancient burial structure

Fyfield Down National Nature Reserve in northeast Wiltshire, just over a mile from Avebury and part of the North Wessex Downs Area of Outstanding Natural Beauty, consists of 800 acres of undulating, hilly land, underlain by chalk and so supporting a diverse range of wildflowers, similar to several other reserves in the county like Parsonage, Pewsey and Wylye, but with the extra feature of a great array of sarsen stones - large boulders of hard, silicified sandstone up to ten feet across. Stones from this location were used as a source for many of the Neolithic monuments in this part of the country, including Stonehenge, 17 miles south, as well as the Avebury stone circle.

Much of the reserve has good long distance views, and is always a peaceful place, not much visited, since, unlike Pewsey, it is not adjacent to a paved road and to reach the main section, a shallow valley containing most of the sarsen stones, requires a walk of at least 1.5 miles.

Fyfield Down is among the oldest national nature reserves in the country, created in 1955, and was recently incorporated into the Avebury World Heritage Site. It contains several ancient remnants including tumuli, ditches, embankments, pathways and a medieval field system, none particularly prominent, though just outside its boundary to the southeast is Devils Den, a (partly restored) group of stones from the entrance to a Neolithic burial chamber.

The Down is also a Site of Special Scientific Interest, for the geological features and also for the vegetation, which includes a wide range of lichens, growing on the stones. Wildflowers are more limited than some similar sites, partly as in many places, the chalk bedrock is covered by neutral soils. Most abundant of the rarer species is meadow saxifrage, of which thousands of plants cover much of the southern slopes of the central valley. Chalk milkwort is quite common, while frog orchid and round-headed rampion are also present. Small patches of acid grassland occur around the sarsen stones, supporting a different set of plants. 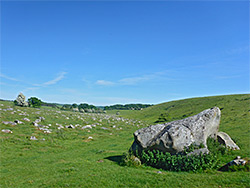 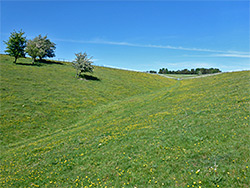 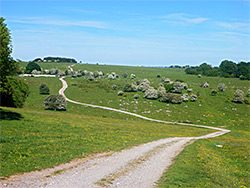 There are several starting points for the walk to the reserve. From Avebury a lane, known as the Herepath (military road), arrives at the western edge after 1.5 miles, and the same point may be reached from the south (1.7 miles) by the Ridgeway, another non-vehicular byway, parking at the junction with the A4, or from the north (2.7 miles) along the same track starting from Hackpen Hill. The best approach though is from the east, using the Gravel Hill Car Park along Downs Lane, just before the road becomes private as it enters Manton House Estate. From here the edge of the reserve is 0.6 miles away, along a track and across a field, while the main area of the sarsen stones is half a mile further. 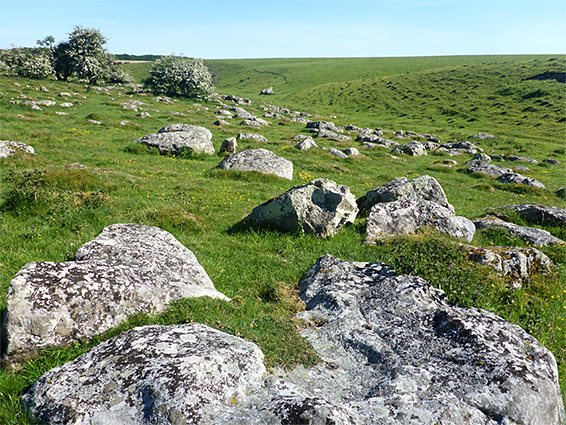 The nature reserve incorporates a low ridge to the southwest (Overton Down), the shallow valley at the centre, containing the sarsen stones, and the slightly less steep slopes on the far side - the actual Fyfield Down, plus some of the higher ground beyond, part of Clatford Down. The best wildflower location seems to be the steeper slopes on the southwest side of the valley, and also around the stones, which are spread along an arc for nearly a mile. Land around the eastern portion is grazed by cattle. The light-coloured boulders have a pleasingly aged appearance, their surface weathered and pockmarked, and partly covered by many types of lichen. At least one stone, towards the west edge, is marked by several deep grooves, thought to be relics of axe sharpening in Neolithic times. The stones are also known as grey wethers, for their resemblance at a distance to a flock of sheep, wether being an old term for a neutered ram. 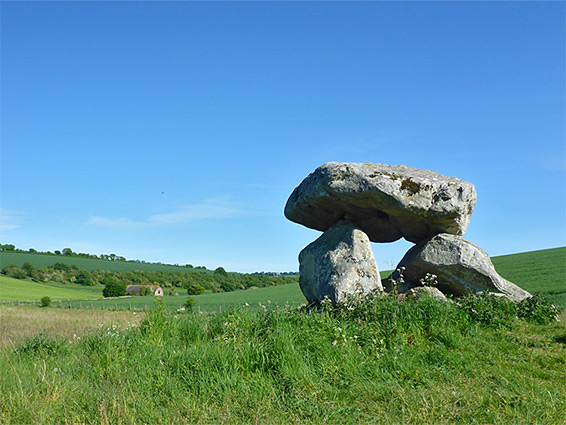 Devil's Den lies 800 feet from the southeastern tip of the nature reserve, along a footpath, and consists of two standing stones with a heavy caprock on top, once the entrance to a narrow, 230 foot-long burial mound, the bulk of which was removed several centuries ago, probably by ploughing. The stones were repositioned in 1921, and sit at a slightly unnatural angle, partly supported by concrete. The chamber was constructed around 4,000 years ago, and is contemporary with other mounds in the vicinity including those at West and East Kennett. Another path to the monument starts 0.6 miles south, along the A40; there is parking space for a couple of vehicles at the junction. 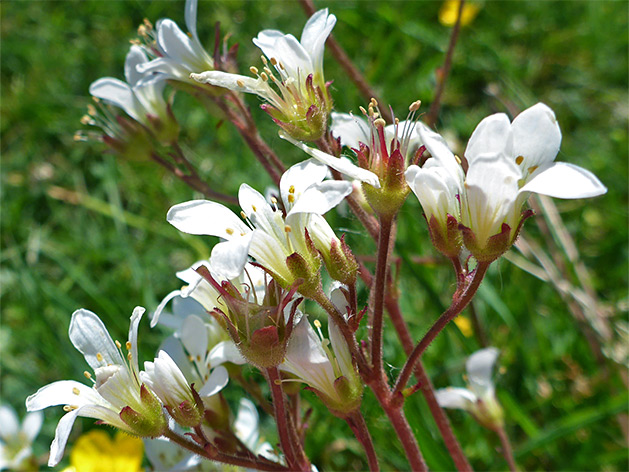