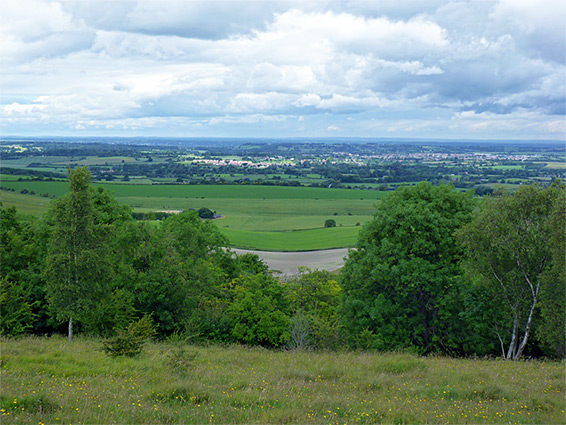 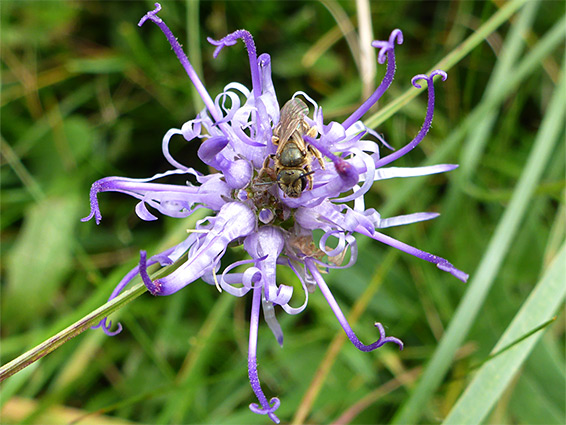 Chalk grassland across a north-facing slope, part of the North Wessex Downs, supporting an unusually wide range of wildflowers including 11 orchid species

Morgan's Hill Nature Reserve, also a Site of Special Scientific Interest, protects one of the most botanically rich areas of chalk grassland within the North Wessex Downs - 24 acres across the north-facing slopes of a flat-topped hill, elevation up to 800 feet, with good views towards Calne and the level plains of north Wiltshire. Elsewhere on the hill are several tumuli and other ancient earthworks, and the long history of the site is also evident from a Roman road along the north edge of the grassland, and the fifth century Wansdyke that crosses the top of the hill, and forms part of the reserve's southern boundary.

The old pathways, and the views, provide two reasons to visit but the main attraction is the wildflowers, best seen in June and July - the site is one of the best for orchids in the whole country, with 11 species found here, rarest being fly, frog, musk and, unusually for such a relatively dry location, marsh helleborine. Other uncommon species include meadow saxifrage, bastard toadflax, autumn gentian and round-headed rampion. In general the rarest species are localised and not so easy to locate; the frog orchid population, for example, may number only a couple of dozen plants. The best place for wildflowers is around some overgrown pits from an ancient quarry, towards the east edge of the grassland. 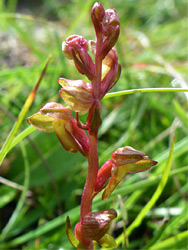 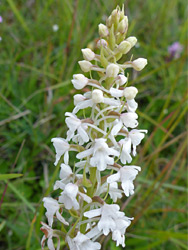 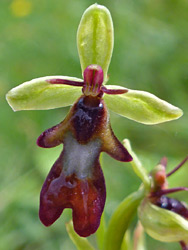 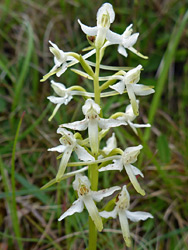 The nature reserve has a secluded location and is not signposted from the nearest road, an unnamed lane between Calne and Bishops Cannings. The closest parking place is at the Smallgrain Picnic Area, on the east side of the road just north of the North Wilts Golf Club. From here, the entrance to the reserve is a quarter of a mile east along a narrow byway, which follows the Roman road; this is open to vehicles but there are no parking places anywhere near the entrance, so the approach has to be on foot, or bicycle. 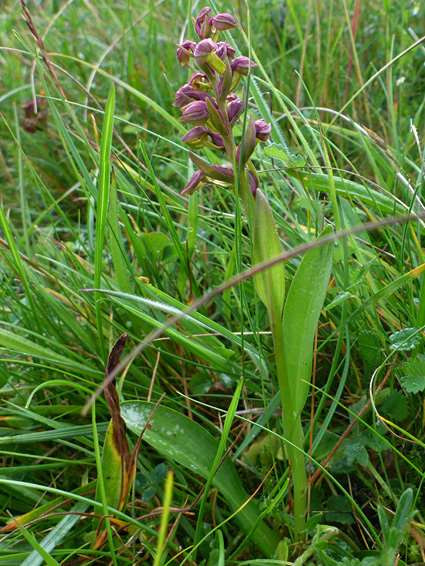 Stem and flowers of the frog orchid

The reserve extends for nearly half a mile in a fairly narrow band on the north side of the hill. The entrance path leads through a small patch of trees and scrub then enters the open grassland that extends to the far edge. A minor north-south gully (and fence) divides the reserve into two halves; beyond, the grass is interrupted by in a few places by scrapes were the underlying chalk is exposed - recently created to encourage certain plants and insects, and also by the low mounds and hollows of the long-disused quarry, around which many of the rarer wildflowers are found. A few of the uncommon species, such as meadow saxifrage and round-headed rampion, occur along the south edge of the field where the soil is slightly richer; the latter is locally abundant on the Wansdyke embankment. One other botanical curiosity is the presence of all three of the UK's native conifer trees - yew, juniper and Scots pine, possibly planted deliberately, to act as markers along the Roman road. The rich assortment of wildflowers sustains a varied butterfly population, noted species being marsh fritillary, brown argus and chalkhill blue. 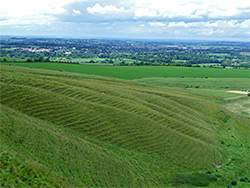 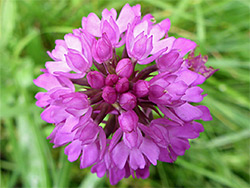 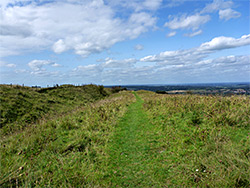